The following is story written by Michael Stevens, a member of the Klipsch forums, who describes the journey of how his trio of Klipsch La Scala speakers turned into one of the coolest home theater builds you will ever see. It is story that goes beyond speakers and cabinetry, touching upon the impact of friends, family, the Klipsch community and so much more. You can also check out the entire thread about this project on the Klipsch forums. It has conceptual renderings, more photos, daily videos of the progress, detailed commentary and installation issues as well as host of other goodies.

Since purchasing my first Klipsch speakers in 2008, I have since owned just about every Klipsch Reference speaker as well as a few Klipsch Heritage speakers. I was always of the opinion that Klipsch Heritage speakers looked “dated” and were too different from the modern design of the Reference Series that I was accustomed to. Since them, I began a quest to hear as many various Klipsch speakers in my own home, with my own gear so that I might know firsthand how they sound and share my thoughts and photos with the Klipsch community. Little did I know I would begin a quest that would lead me much further than I ever thought I would go.

In July of 2014, I saw a listing on Craigslist for a pair of LaScalas. The seller was asking $850, which was a very good price. At the time, I had been using Klipsch RF-83s and RC-64 in my dedicated home theater room for the past 6 years and absolutely loved them. The gentleman that was selling them was moving into a much smaller home and wanted to downsize to smaller Klipsch speakers. I told him the only speakers I had that I would be willing to part with were a pair of KG 3.2’s that I was using in my office. I shared with him that I would not expect the KG 3.2 to produce anywhere near the sound that the LaScalas would. I made an offer to the seller that I was hoping he would refuse because frankly I did not have anywhere to put the LaScalas nor did I like the style of them. But to my surprise, the seller insisted that I bring the KG 3.2’s over for a listen and was open to my offer.

After listening to the KG 3.2’s, the seller felt they would be perfect for his smaller home and was grateful to trade his LaScalas for $400 cash + my KG 3.2 speakers. I expected to bring them home, do some A/B comparison between the LaScalas and my RF-83’s and share my review with the Klipsch community and then eventually pass them on to someone that would truly appreciate them. From the moment I hooked up the LaScalas, I knew I was in trouble. Although the RF-83s are amazing speakers, the LaScalas produced so much more detail and due to the large midrange horn, vocals sounded much more smoothe and pronounced. 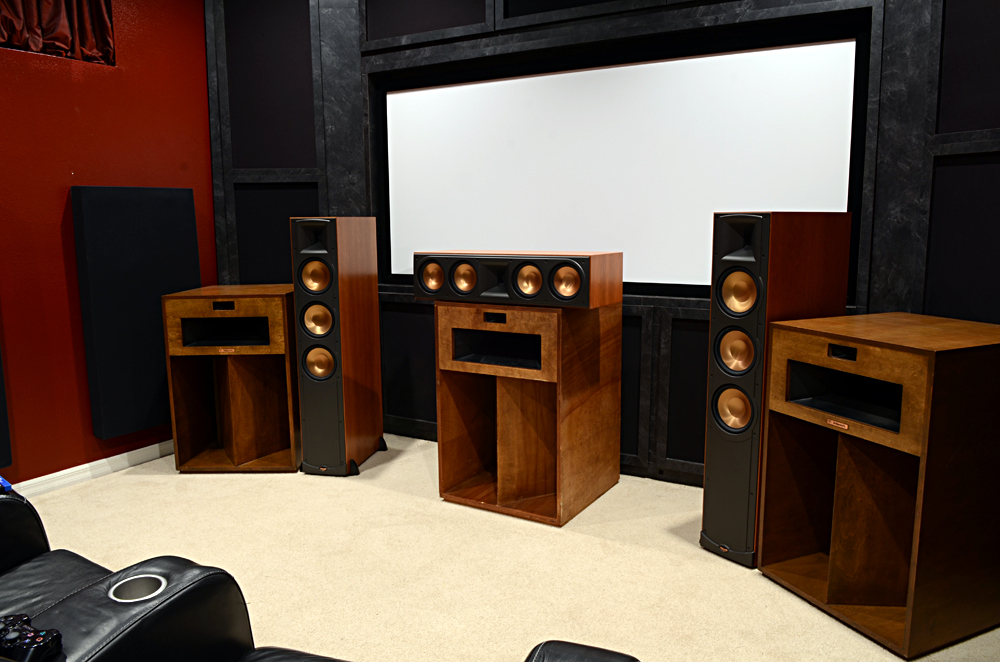 Over the next week, I tried to convince myself that although the LaScalas clearly sounded better, they just were not the style that I preferred. I also knew if I were to incorporate them into my home theater, I would want to purchase a third LaScala to use as a center channel. I knew this would be a long shot but posted in the Klipsch forums regarding my new purchase and wanted to see if anyone had a single LaScala that they would be willing to part with. “Wstrickland1” from the forum said he was selling three LaScalas and had a buyer interested in purchasing a pair from him. The only problem was how to get this beast from South Carolina to Florida. Luckily, “Wstrickland1” said that in a month he would be passing through my area on the way to a business meeting, so within a month, a third LaScala was proudly sitting in my home theater.

What had I gotten myself into? What was I doing? I genuinely thought there would never come the day that I would even consider parting with my RF-83s and RC-64. I began a quest over the next week to do as much comparison between the two sets of speakers. I wanted to make absolutely sure I was making the right decision. To my surprise, at the end of the week, I knew what I must do. I was 100% confident that it was time for “Youthman” (me on the forums) to dip into the dark pool of the Heritage Series! 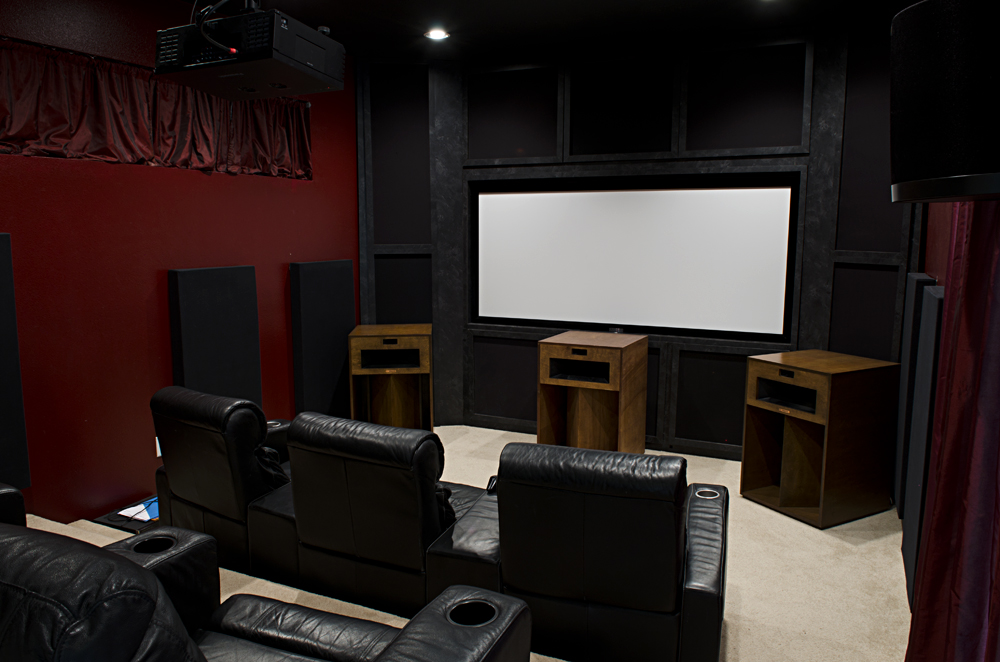 Within 2 weeks, I sold my RF-83 & RC-64 and have had absolutely no regrets since. Unfortunately, due to the LaScalas size, they would not fit behind my false wall. I contacted my friend Wakejunkie (from the Klipsch forum) and he suggested that he could build a new front cabinet that would accommodate the LaScalas. Although WakeJunkie lives 600 miles away, he was confident to make this dream a reality. Since I was upgrading the front soundstage, I figured I might as well upgrade the screen too. Shortly thereafter, WakeJunkie purchased the rough-cut red oak wood in August of 2014 and I bought enough Seymour Center Stage XD fabric to build a 150” Acoustic Transparent screen.

Little did we know, within a few months of starting the project in January of 2015, at only 36yrs old, WakeJunkie would suffer from three major strokes that would forever change his life. [Editor’s note: We did an article about WakeJunkie on The Klipsch Joint last year.] He was diagnosed with Vascular Dementia. The strokes affected WakeJunkie's short term memory in that he could only remember about three days. After three days, any memories made during those days would simply fade away. What used to take him one hour, now takes him about five-six hours due to the strokes without any ability to retain short term memories. Fortunately, he remembered everything pre-stroke as those memories, knowledge, skills were stored in his long-term memory.

Over the next nine months, WakeJunkie would begin the road of rehabilitation and therapy. In October of 2015, he contacted me to say that he thought he was ready to begin working on the project again. He asked me if I had plans for New Year’s. Although he didn’t want to make any promises, his goal was to finish the cabinet before the New Year. Jokingly, I told him let’s not specify which year.

It wasn’t long before WakeJunkie realized he would not be able to finish this project alone. His strength, memory and problem solving skills were not anywhere near what they used to be, so he began to recruit help from his dad and several local friends to assist with the project. Over the next eight months, they would continue to build the cabinet that would soon be the new home of the LaScala Trio and four Klipsch RSW-15’s.

On Saturday, June 18, the special day had finally arrived! My dad and I hooked up a 20’ enclosed trailer and headed for Alabama!

During the trip, we met up with WakeJunkie and his wife, making a side trip to pick up his very own Klipsch LaScalas and made a stop to visit the home theater of Superdave, another friend of ours from the Klipsch forum. Within two days of leaving Florida, we had arrived in Alabama, loaded up the cabinet and thus began its journey to its new home.

On Tuesday, June 21, WakeJunkie, myself and my father began the build. Over the next seven days, we ran a 20 amp dedicated circuit, wired five Lutron Dimmers to five Lighting Zones, constructed the front wall and screen and moved the projector outside the room in between a hall closet and my son’s closet.

Obviously, there struggles here and here of which you can read about them on my thread in the Klipsch forums. (You can also see my daily video recaps on my YouTube page.) It was only a one week install which meant nearly-sleepless nights and plenty of energy drinks.

Everything turned out so much nicer than I could have ever imagined. The custom cabinet features hand carvings, a beautiful diamond pattern that surrounds the screen, arch lighting, lighting behind the screen, LED lighting around the screen, the ability to raise the 150” AT Screen that is supported by gas shocks to gain access to the speakers and a drawer that extends to allow easy access behind the components. WakeJunkie’s cabinet is truly a work of art and his craftsmanship and attention to detail is to be admired.

My journey to build my LaScala Trio home theater was so much more than just building a cabinet and setting up some speakers. It was about friendship, family, the Klipsch community, determination, hope and beating the odds. I’m truly grateful for the friendship that I have with WakeJunkie and his family. He is living proof that you can overcome adverse circumstances by surrounding yourself with people that believe in you and are willing to support you through the process.

What do you think of Michael’s La Scala home theater build? Post in the comments! 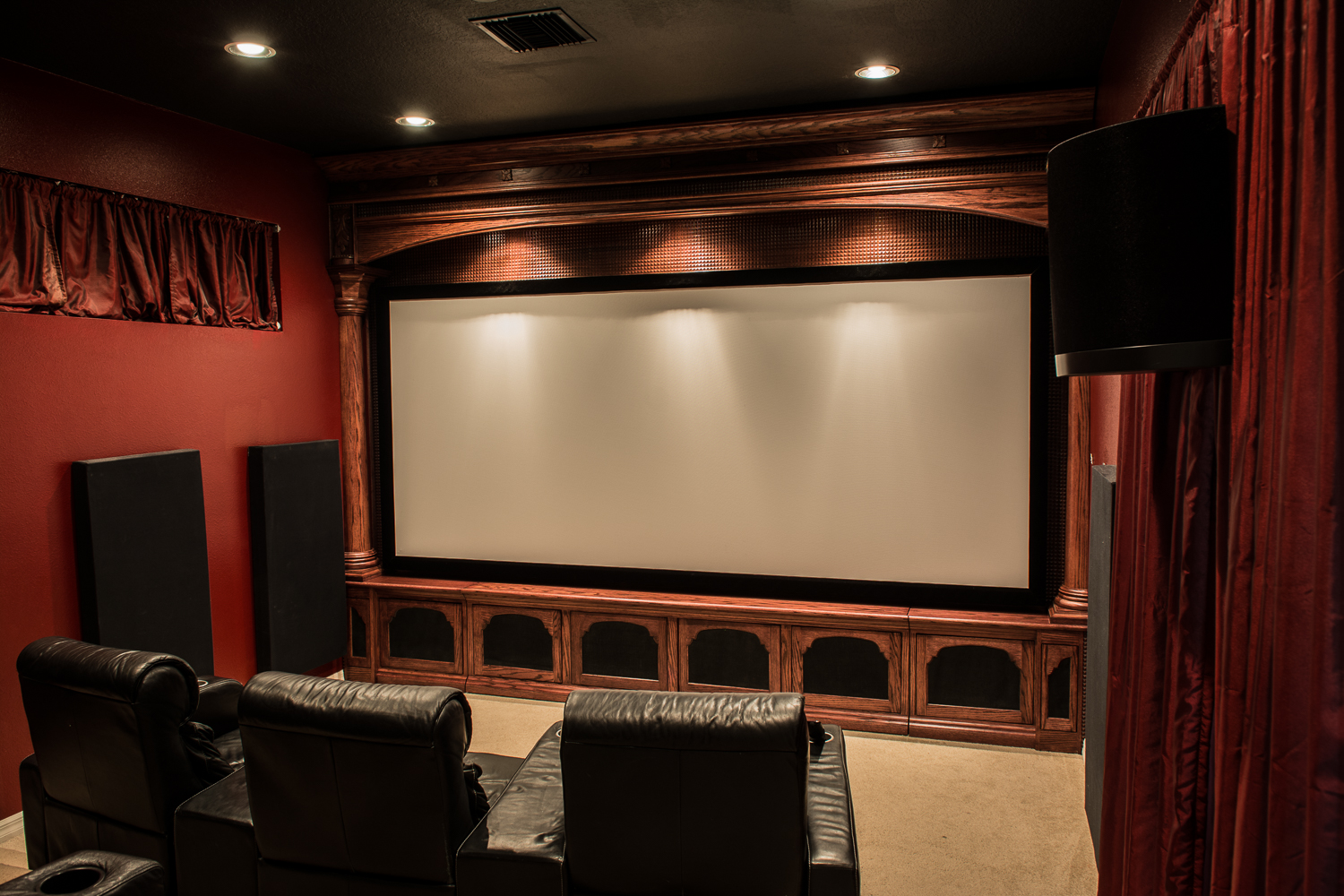 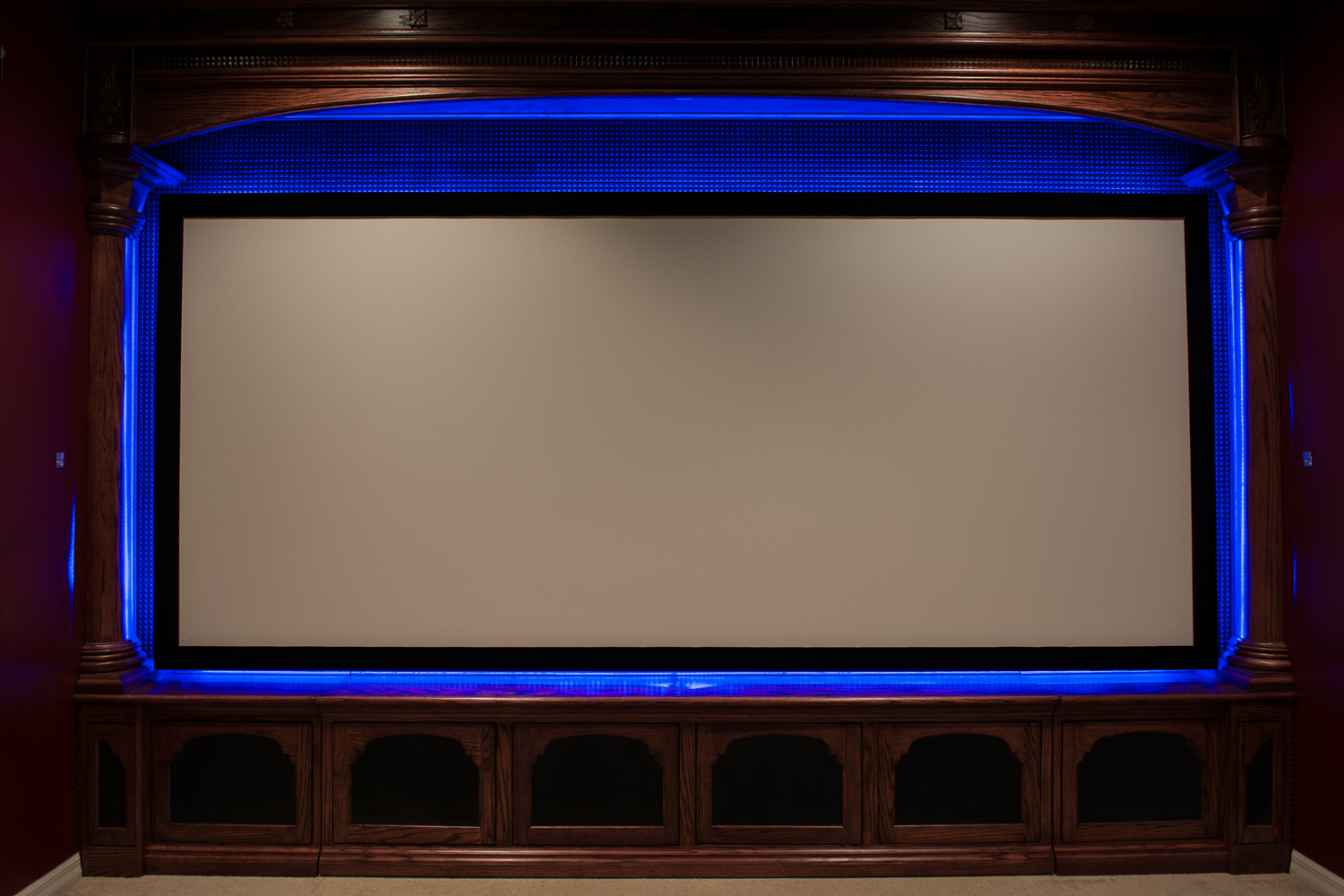 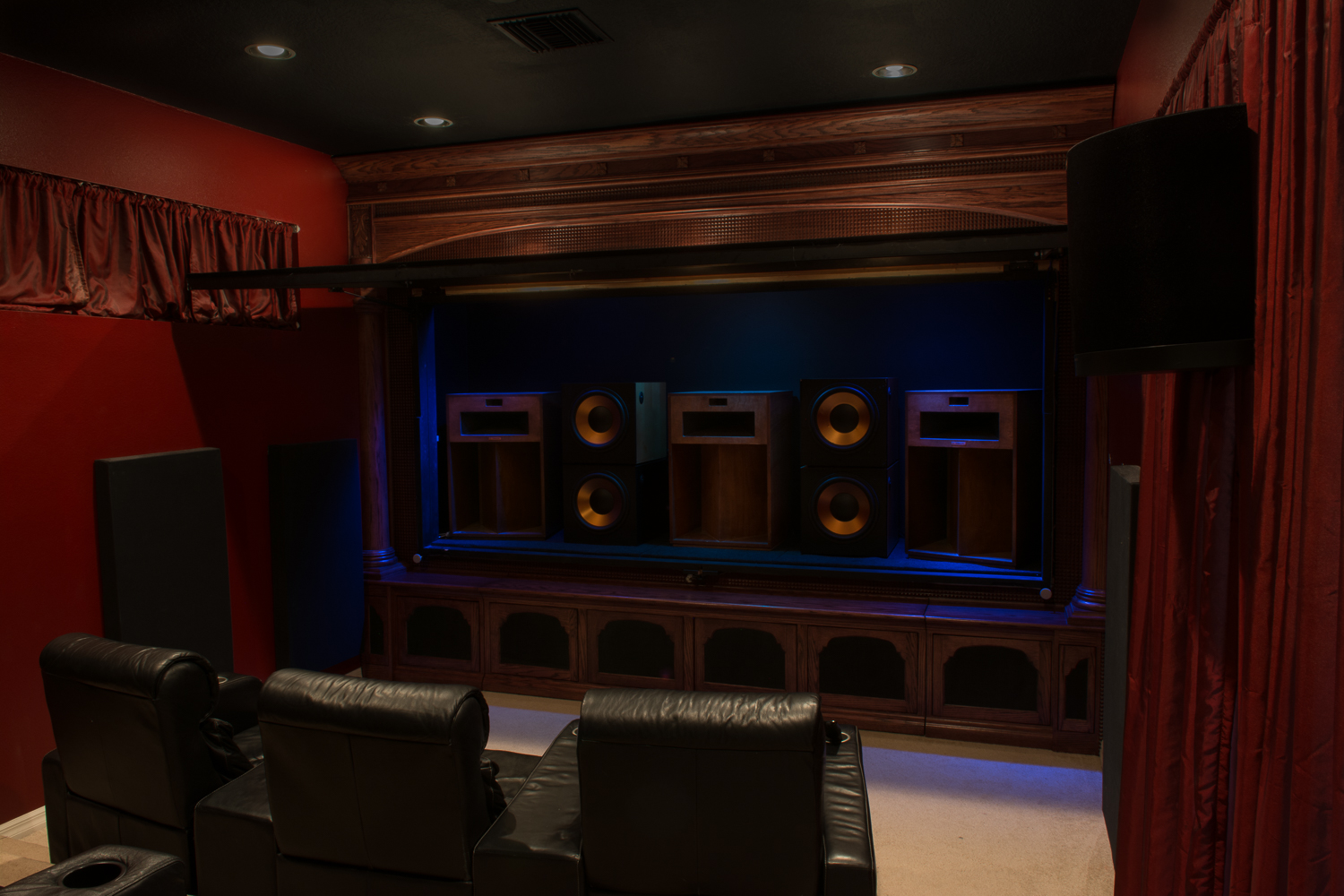 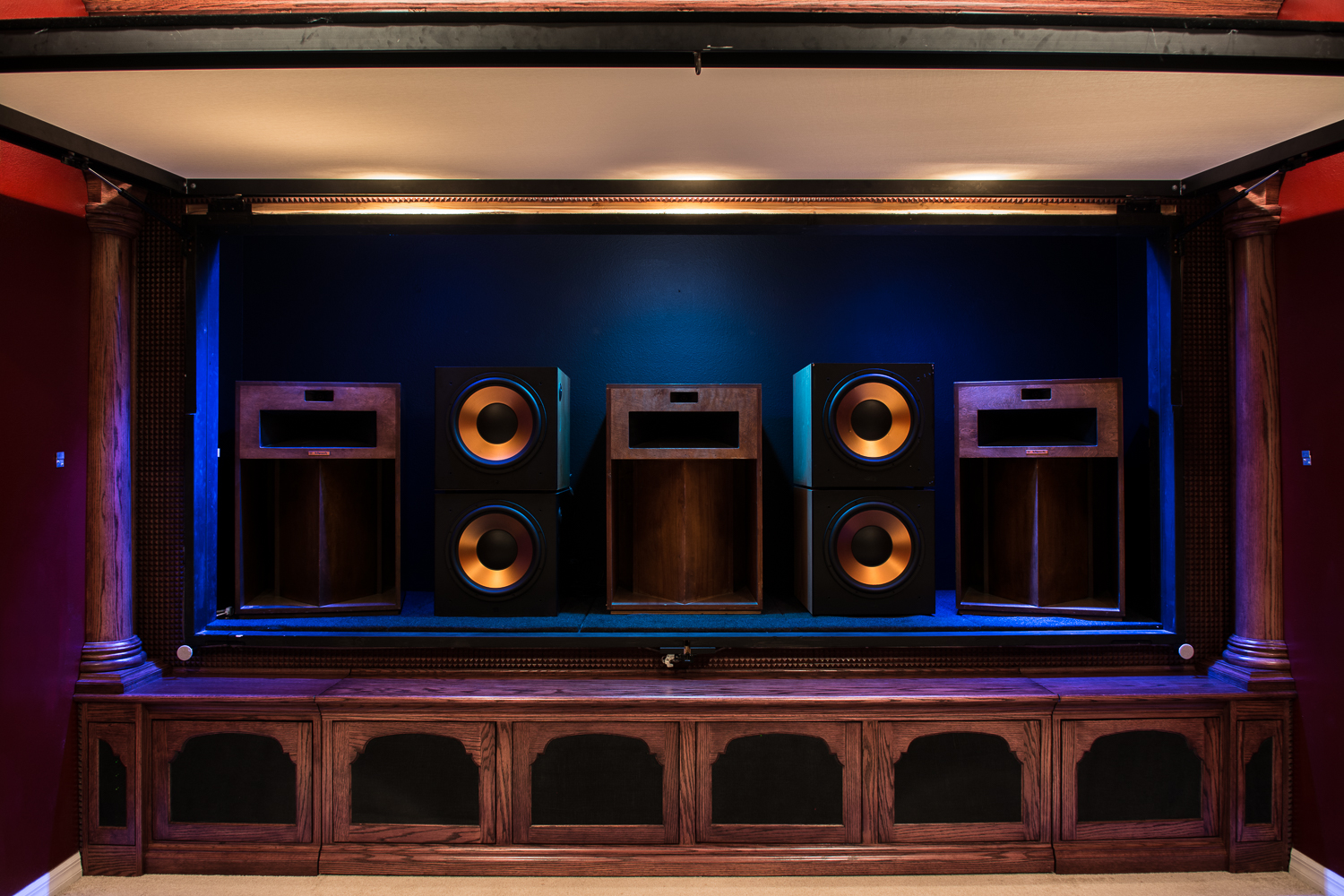 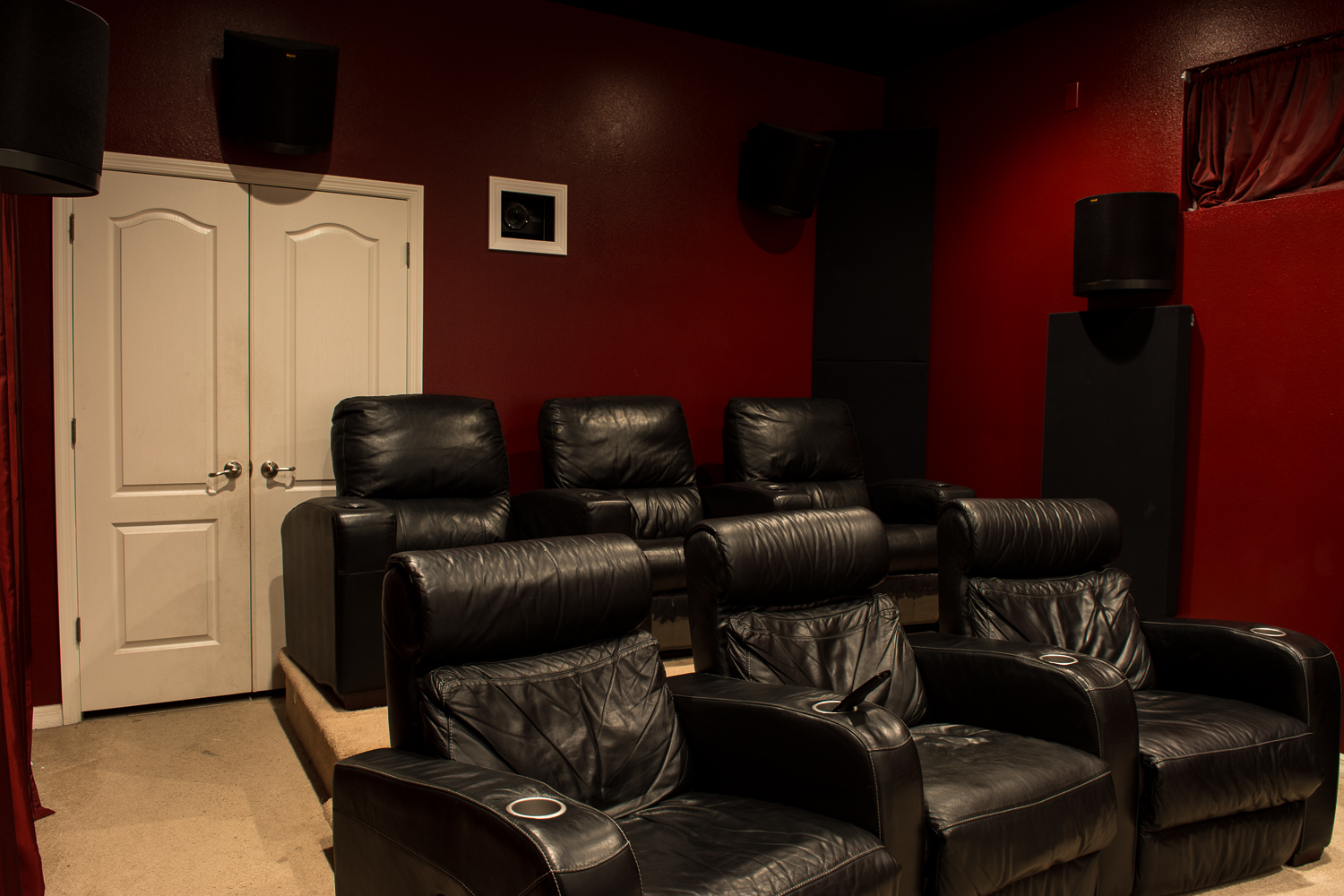 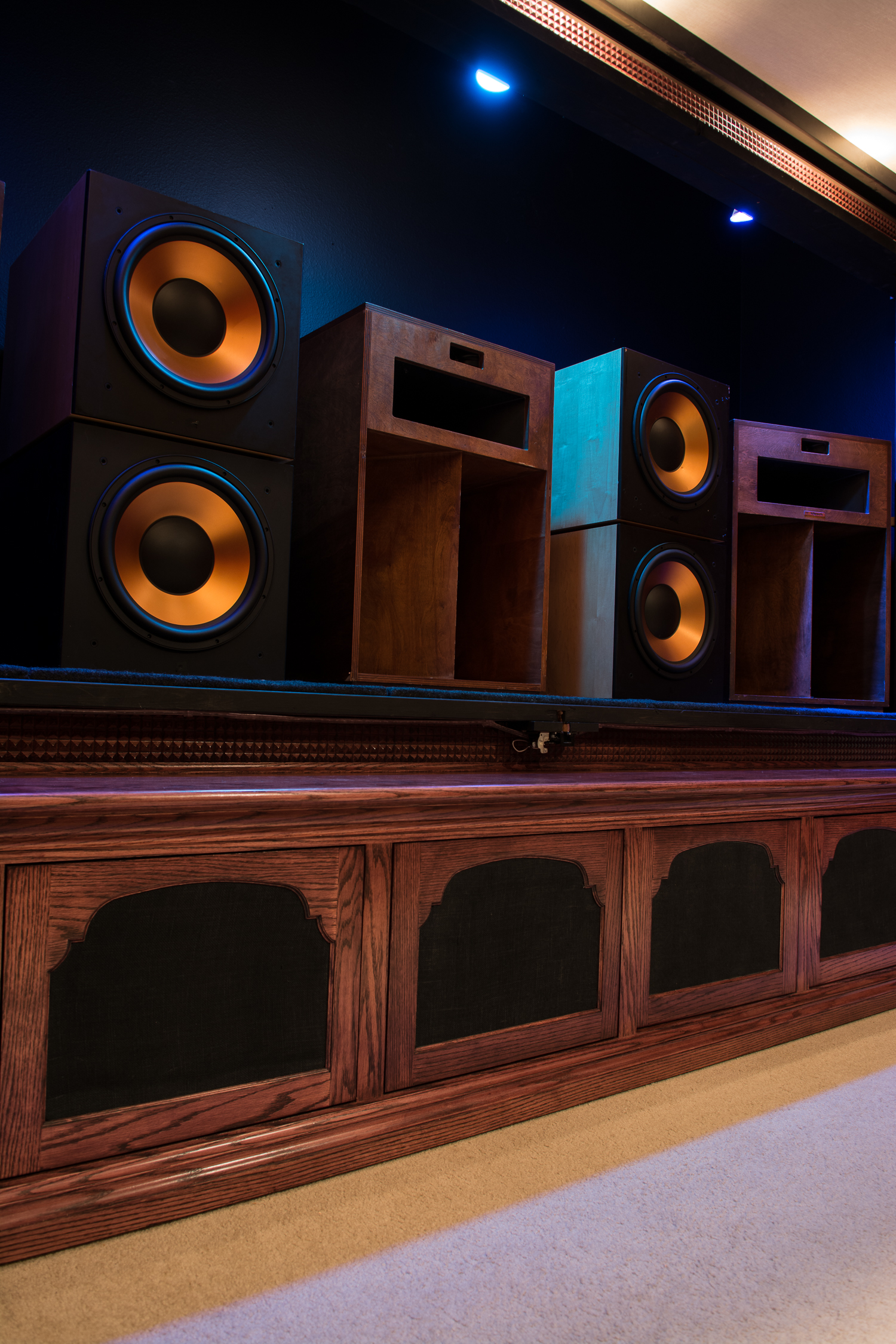 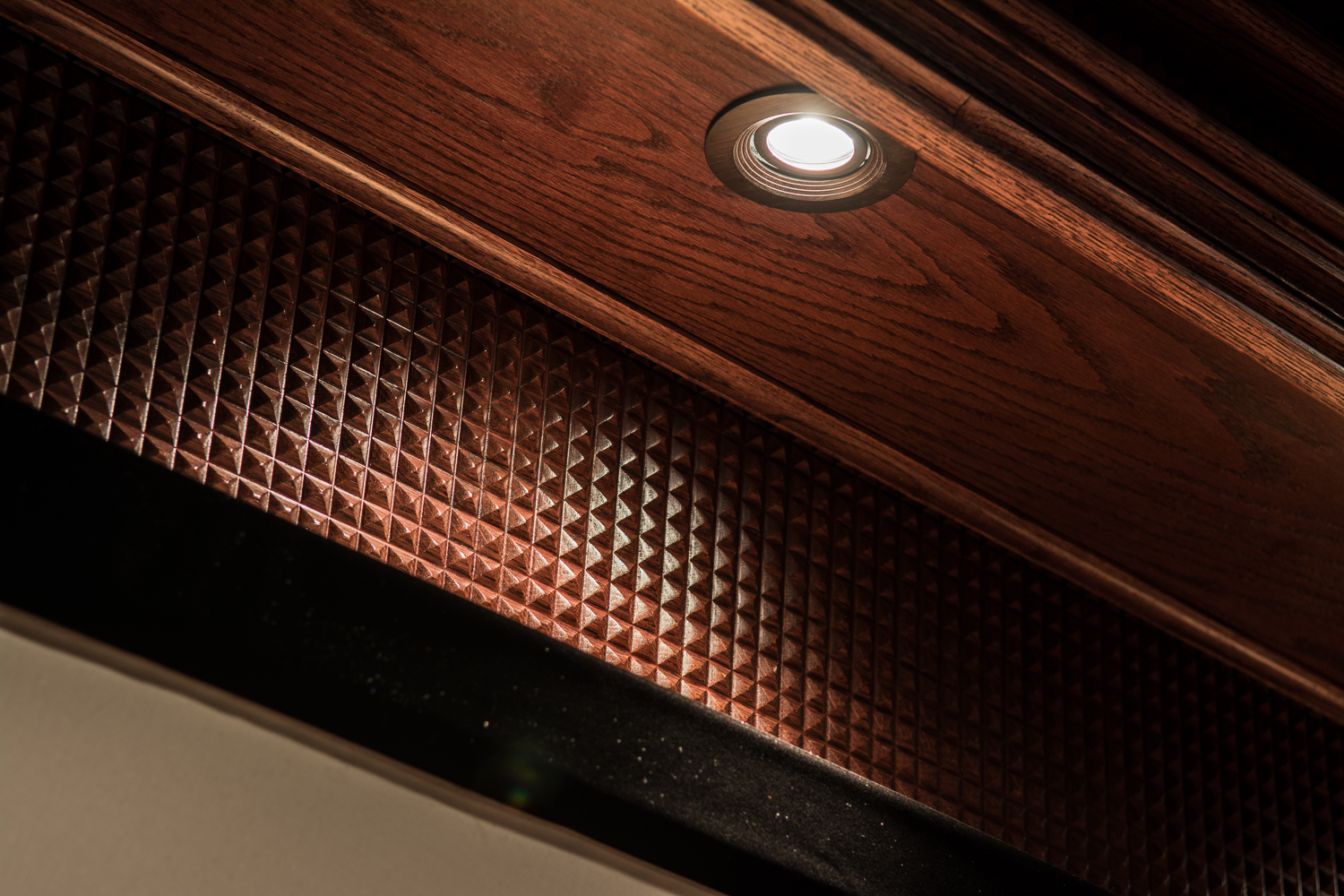 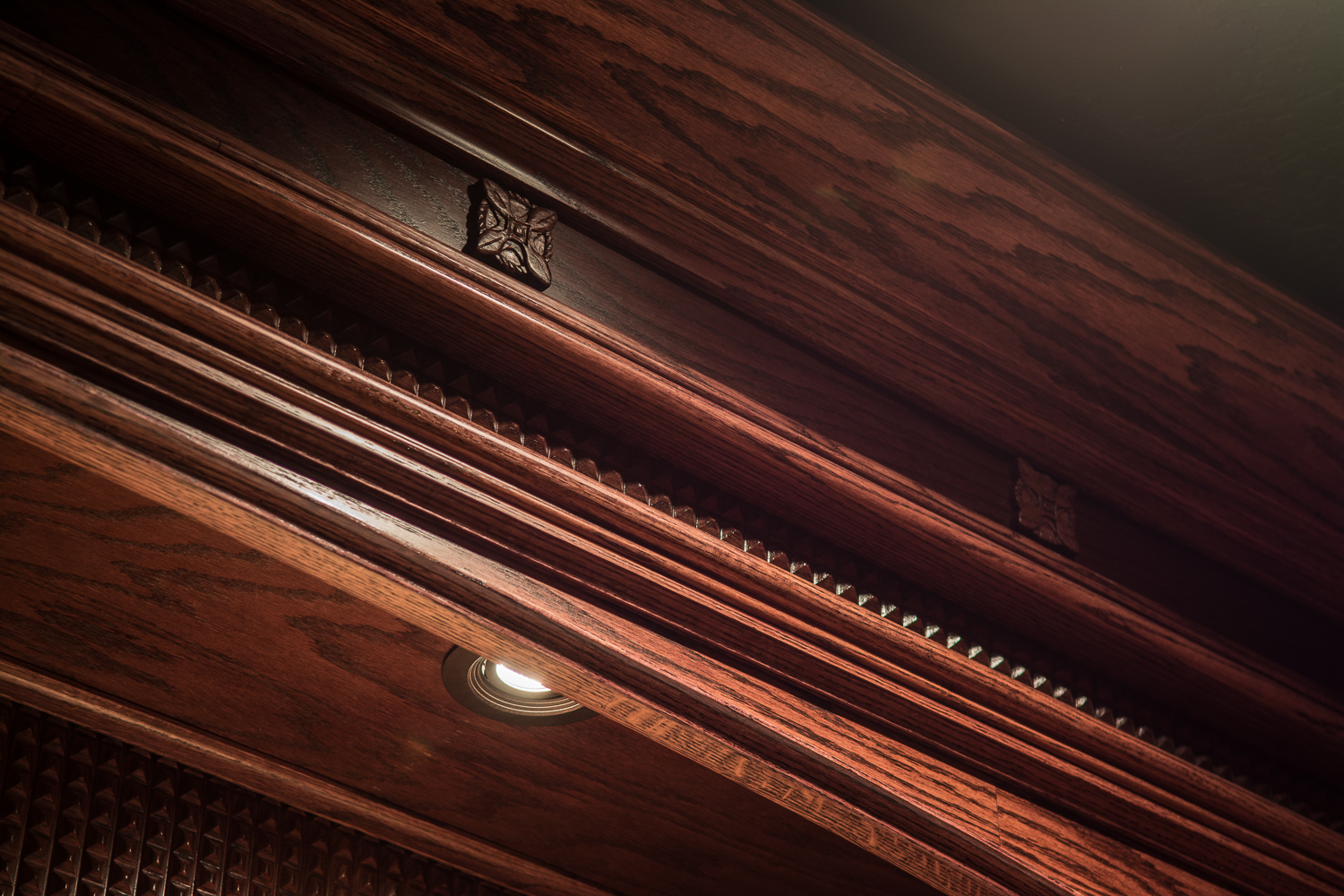 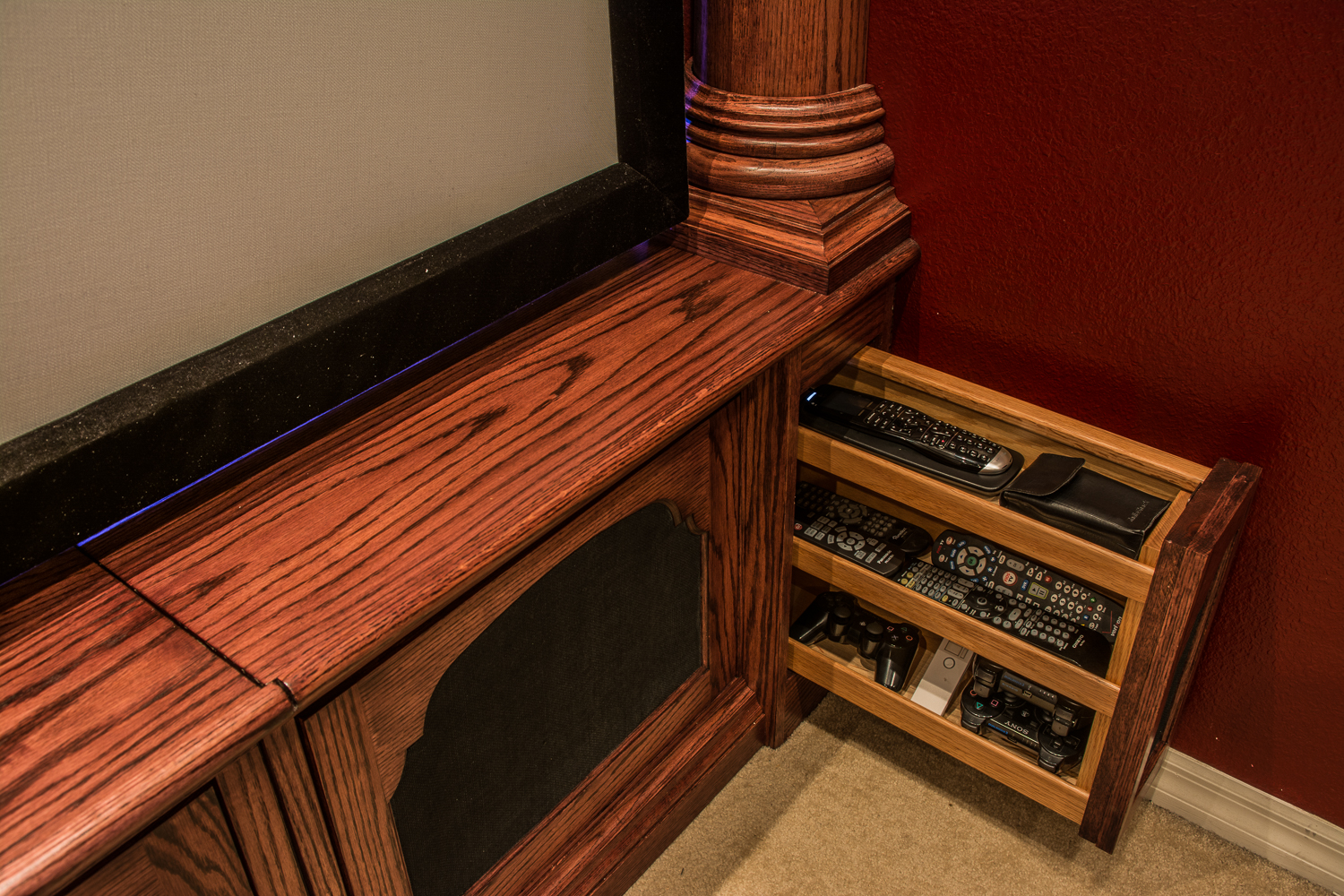 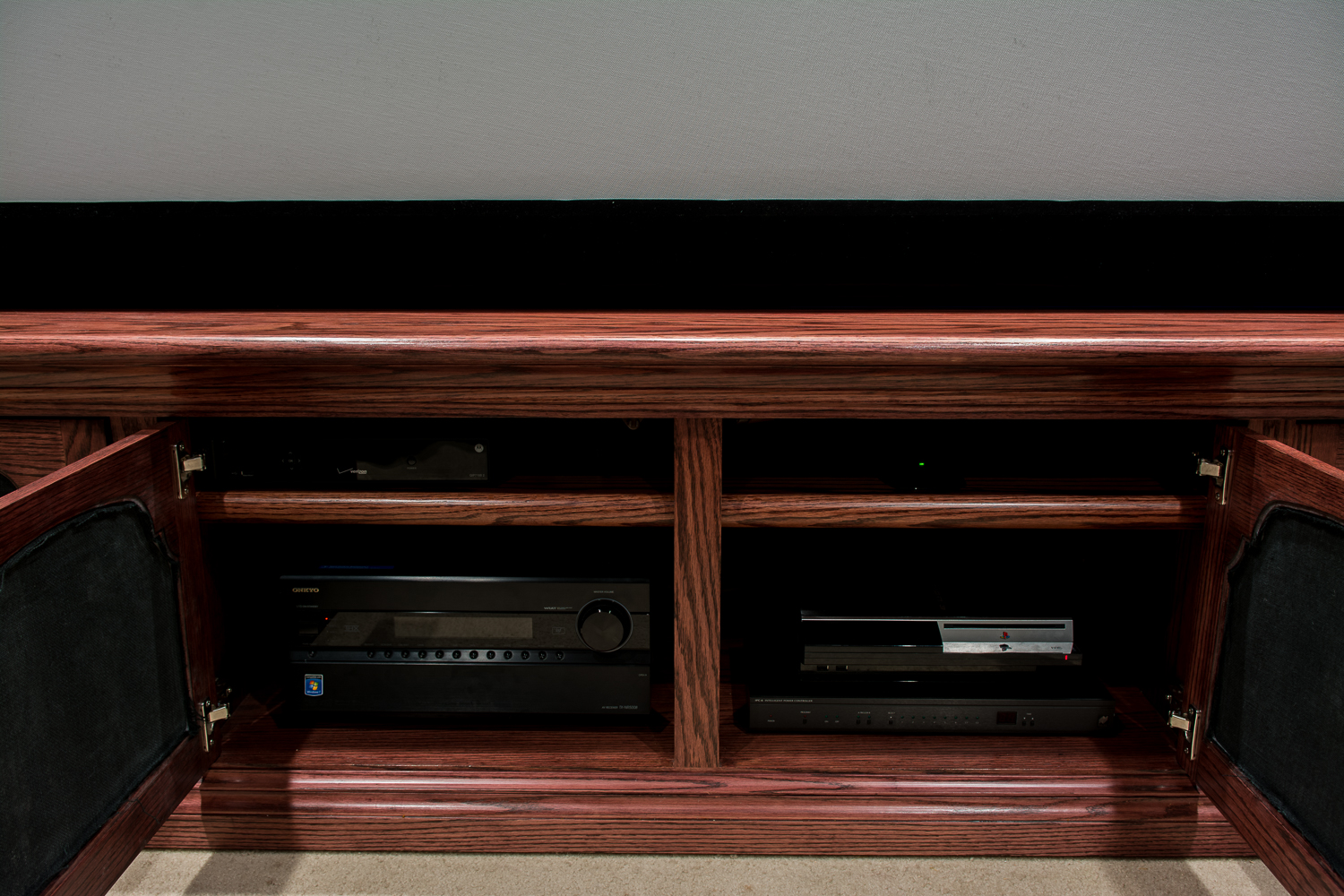