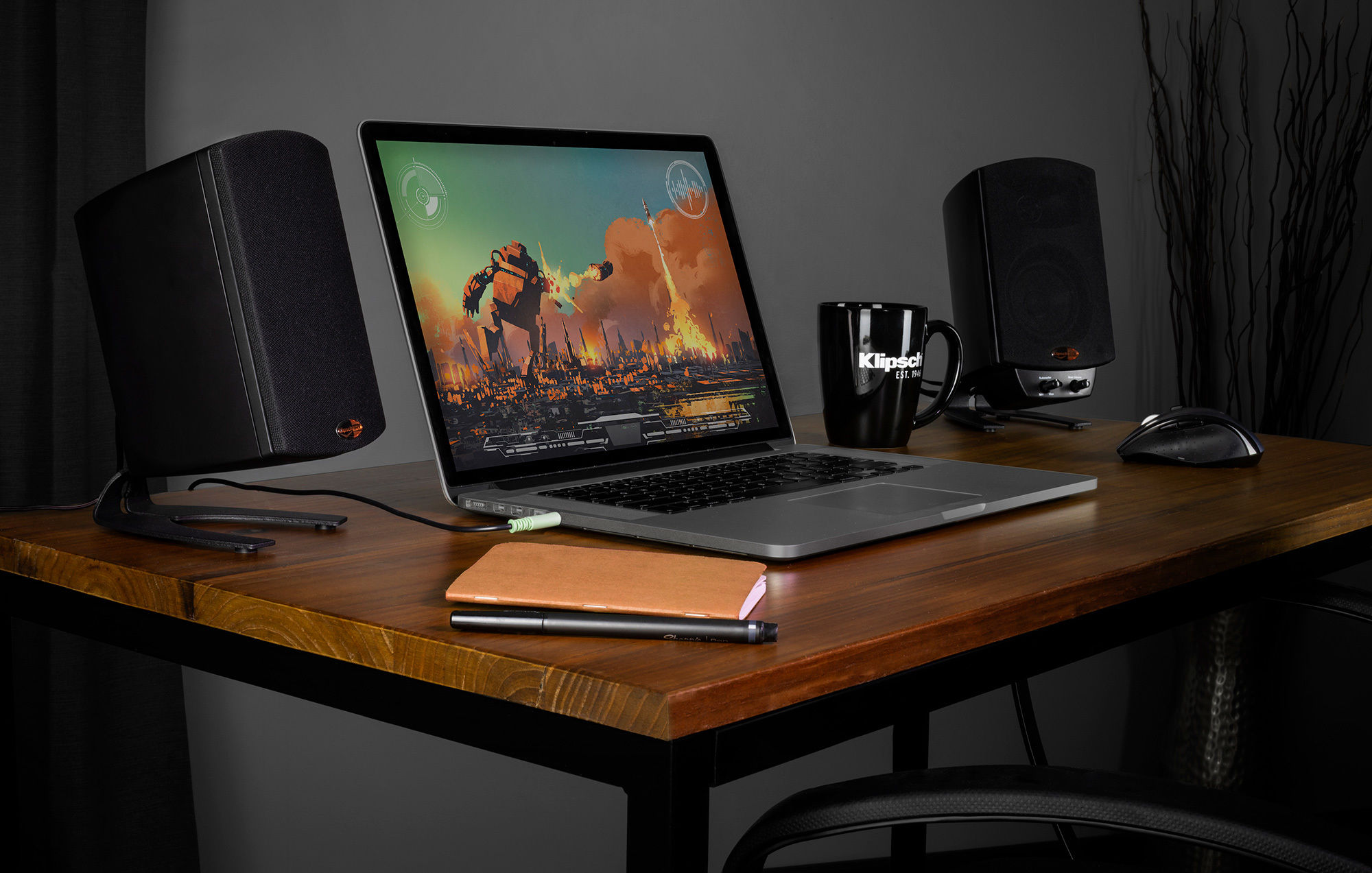 New opportunities are always popping up to explore the best video games on the market. But, maybe your current speaker system just isn’t doing the trick and you’re getting smoked by opponents.

What advantage do they have that you don’t?

One way to slay the competition on the digital battlefield is to up your speaker game in the form of the Klipsch ProMedia 2.1 THX® Certified speaker system. These speakers will help provide the edge you need with floor-shaking, crystal-clear sound at a price you’ll love.

Whether they use sound to immerse you more fully into their worlds, or intensify the level of realism, or even help you understand what’s happening around you, all of our picks offer up a sound experience you won’t soon forget.

The post-apocalyptic theme is nothing new for video games. But, in Apex Legends, developers take the idea of what happens after the nuclear fallout to a new level. According to the EA website, “Pioneers, explorers, and outlaws used to spend their lives locked in an endless power struggle – now, they settle their differences in the Apex Games, a bloodsport where Legends from all corners of the Frontier compete for money, fame, and glory.” The first rule of Fight Club maybe not to talk about Fight Club, but in this instance, you’ll want to hear your opponent make their move before it’s too late.

More than 25 years after the first iteration, Mortal Kombat remains one of the most successful franchises in gaming history. The success of the game is due in large part to ultra-realistic sound effects as players fight each other to the death in an alternative universe consisting of 18 realms. Mortal Kombat 11 is the next chapter in a saga that surpassed the term “epic” long ago.

Speaking of historic franchises, even those outside the gaming realm know the story of “Resident Evil,” as the game also generated a series of films. Raccoon City has fallen into chaos as the mysterious T-virus has turned humans into flesh-eating zombies. Pick up the Klipsch R-41PM or R-51PM bookshelf speakers to add an extra measure of security. Both sets of speakers produce a thundering sound. Trust us - you absolutely need to hear every move the zombies make in order to avoid becoming one yourself!

Regain your honor. That’s the goal of “Sekiro: Shadows Die Twice.” In 16th-century Japan, you are a disfigured warrior who must try and save a young hero. Players are armed with ninja skills and a host of prosthetic weapons to fight their way through a host of dangerous enemies. The sound effects are so real you will feel the vibration of the gong of war right down to your toes.

The mountain ranges of the post-apocalyptic Pacific Northwest provide the backdrop for “Days Gone.” Deacon St. John is a former biker gang member turned bounty hunter who must do battle with zombie-like creatures called “Freakers” to try and save his wife Sarah. Your “Days Gone” game play experience could go even further with the Klipsch 5.1 Reference Home Theater pack. You’ll experience the heart-stopping footfalls of mountain lions, bears, and wolves. This system is so precise and lifelike you will even hear the crackling of a roaring fire in gameplay.

We don’t just watch video games - we play them. Everything we see and hear during gameplay has been carefully orchestrated by the game’s designers to help navigate the digital landscape while having a great time.

An incredible sound experience helps place you inside a game’s world, providing the essential reactive ingredients to help immerse us into another realm.

If the theory is true that a movie is 50% reliant on sound to entertain, one could argue what we hear while playing a video game is even more critical to the experience. It's the difference between virtual life or death.