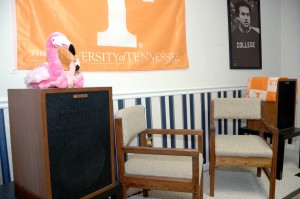 From tickets to couches to TVs to…err…“encounters”, you never know what you’re going to get with Craigslist.

Rewind about two and a half years ago when Steve Bales purchased his first set of Klipsch speakers – a pair of Reference RF-62 II floorstanding speakers.

“I was impressed by the detail and lifelike sound in our high-ceiling living room,” Bales said.

Bales was so impressed that he joined the Klipsch Forums, engaging with a bustling online community of Klipsch devotees.

“I learned about the different capabilities of each line and Heritage intrigued me. At a time when many consumer goods are manufactured overseas, they continue to be manufactured Hope, Arkansas. That was appealing. The quality construction, efficiency and musicality of the Klipsch Heritage Series were even more attractive.”

Thus, a quest to find a pair of vintage Klipsch speakers was born.

With no audio shop stocking the Heritage Series near his home in Peachtree Corners, Georgia (north side of Atlanta), Bales inevitably found himself scanning Craigslist where he could easily scour the surrounding areas and find the object of his new-found affection.

“I thought I could sample what the Heritage Series had to offer by purchasing on the used market to see what all the fuss was about.”

Bales found a listing in the little town of Ball Ground for a pair of Klipsch Heresy speakers that were made in 1980. This was a very meaningful year to Bales, as he received his graduate degree, began his career and married his beloved.

Of course, Bales auditioned the speakers first to make sure they were in working condition. After all, no one wants to get burned after driving an hour and back.

They sounded amazing which didn’t surprise Bales, but what did surprise him is their astounding pedigree. 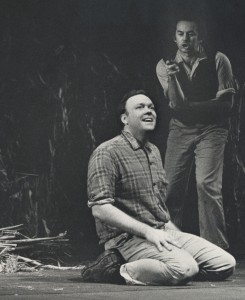 Robert Moulson performing in Of Mice and Men

Turns out, the speakers had belonged to the owner’s father-in-law, Robert Moulson. Moulson was an American classical tenor who performed in operas and concerts in the United Sates and Europe from the 1950s through the 1980s.

Bales also learned that Moulson performed a great deal in Germany and is perhaps most famous for his role of Lenny Small in Carlisle Floyd's Of Mice and Men.

“I can imagine Mr. Moulson enjoying all genres of music on these Klipsch speakers, but particularly opera and the show tunes he loved to sing.”

The trip to Ball Ground was entirely worth it for the speakers and ended up meaning much more.

“I loved meeting Mr. Moulson's daughter and son-in-law and learning about him. I might even develop an interest in opera! I would have bought the speakers anyway, but the story added a dimension I was not expecting.”

“Klipsch has re-kindled my enjoyment of music all over again.”

Not bad for a Craiglist encounter.

Do you have an interesting story on how you acquired your Klipsch speakers? Post it in the comments below or email alex.leopold@klipsch.com.

WARNING: Purchases of used or new Klipsch speakers or headphones at garage sales, Craigslist, eBay or any other unauthorized dealers void the warranty of the product. Warranties are non-transferrable. To learn more, go to http://www.klipsch.com/policies

Categories: Vintage Made in America Speakers