Another year and another Klipsch Pilgrimage is in the books. This year’s event was the biggest one yet and arguably one of the most fun.

From the factory and museum tour to what went down on a nearby farm, the 2016 edition of the Klipsch Pilgrimage will not be forgotten.

Before we dive into the weekend’s events, we have to explain some of the basics to those who may not be “in the know” about this celebration of Klipsch and its community. 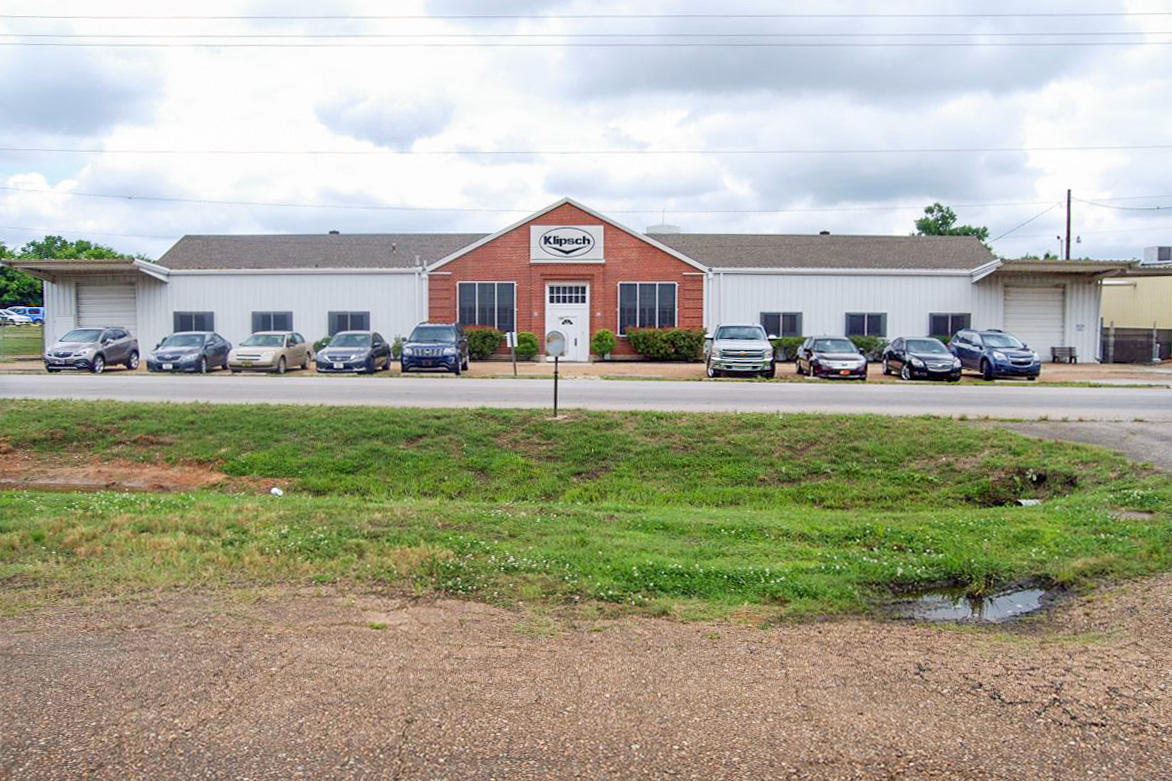 WHAT IS THE KLIPSCH PILGRIMAGE?

Just about every year for – gosh, we don’t know how long – Klipsch fans have come together to visit both the Klipsch factory in Hope, AR and corporate headquarters in Indianapolis which houses the engineering, marketing and customer service teams.

While it’s certainly a celebration of Klipsch speakers and the people who make them, the Klipsch Pilgrimage represents community, togetherness, education and, quite simply, fun. Visitors get to tour the factory, check out the audio museum, demo all kinds of speakers, engage in the Klipsch version of Woodstock and even show their gratitude to Klipsch employees.

This year, more than 150 people travelled to Hope, AR, the largest showing to date for the Klipsch Pilgrimage. Many pilgrims – a mixture of men, women and even entire families – shuttled their way to this little Arkansas town in their cars, trucks and RVs. Klipsch enthusiast Rodney Newton was a most gracious host on his 660-acre property.

Believe it or not, this undertaking is completely organized and run by members of the Klipsch Forums, one of the most influential and engaging audio forums in the world with over 25,000 users. These are some of the brand’s biggest supporters (and critics) and we are always grateful for their passion. We simply wouldn’t be where we are without them.

While we would like to thank everyone involved in putting on this event, we must issue a special THANK YOU to Christy Luquet (aka “dtel’s wife") who took the reigns this year and made it an unforgettable experience for everyone involved.

When you really get down to it, it’s incredible and extremely humbling to have a large group of people take time out of their lives, take time off of work and travel to Hope, all on their own dime. This kind of thing just doesn’t happen at other companies. It makes us darn proud to do what we do and is a constant motivation to make the very best speakers and headphones on the planet. 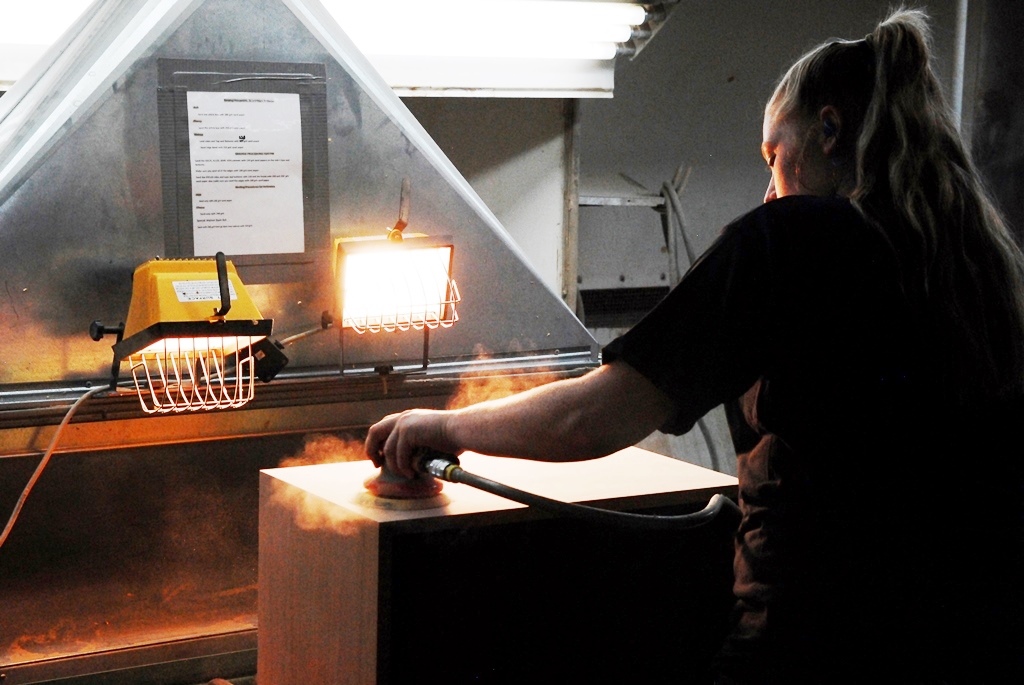 The first full day of the Klipsch Pilgrimage was spent touring the Klipsch factory and surrounding facilities. Luckily for the pilgrims, the factory was absolutely buzzing with scores of 70th Anniversary Klipschorns, Heresy III’s and various speakers from the Professional line, all being lovingly handcrafted right before their eyes.

Even though it was technically a normal day of production, it felt like a celebration for everyone involved. Countless visitors remarked in awe about how stunned they were that such amazing products were still being handmade right here in the United States.

The workers at the Hope factory were also genuinely thrilled to have an audience consumed by the work they do day-in and day-out– the endless sanding, screwing, staining, etc. After all, it’s not easy building a Klipsch speaker. Heck, if it were easy, everyone would be doing it. For example, the legendary Heresy III is built up from a single sheet of wood. It’s really kind of mind-blowing.

A terrifically funny-but-not-funny anecdote from the factory tour was from the floor manager, Jake Townsend, who told everyone that he has to keep the new, glorious 70th Anniversary Klipschorn logos under the lock and key in his office because they keep “walking away” otherwise. (Not that it stopped any pilgrims from asking if they could have some!) 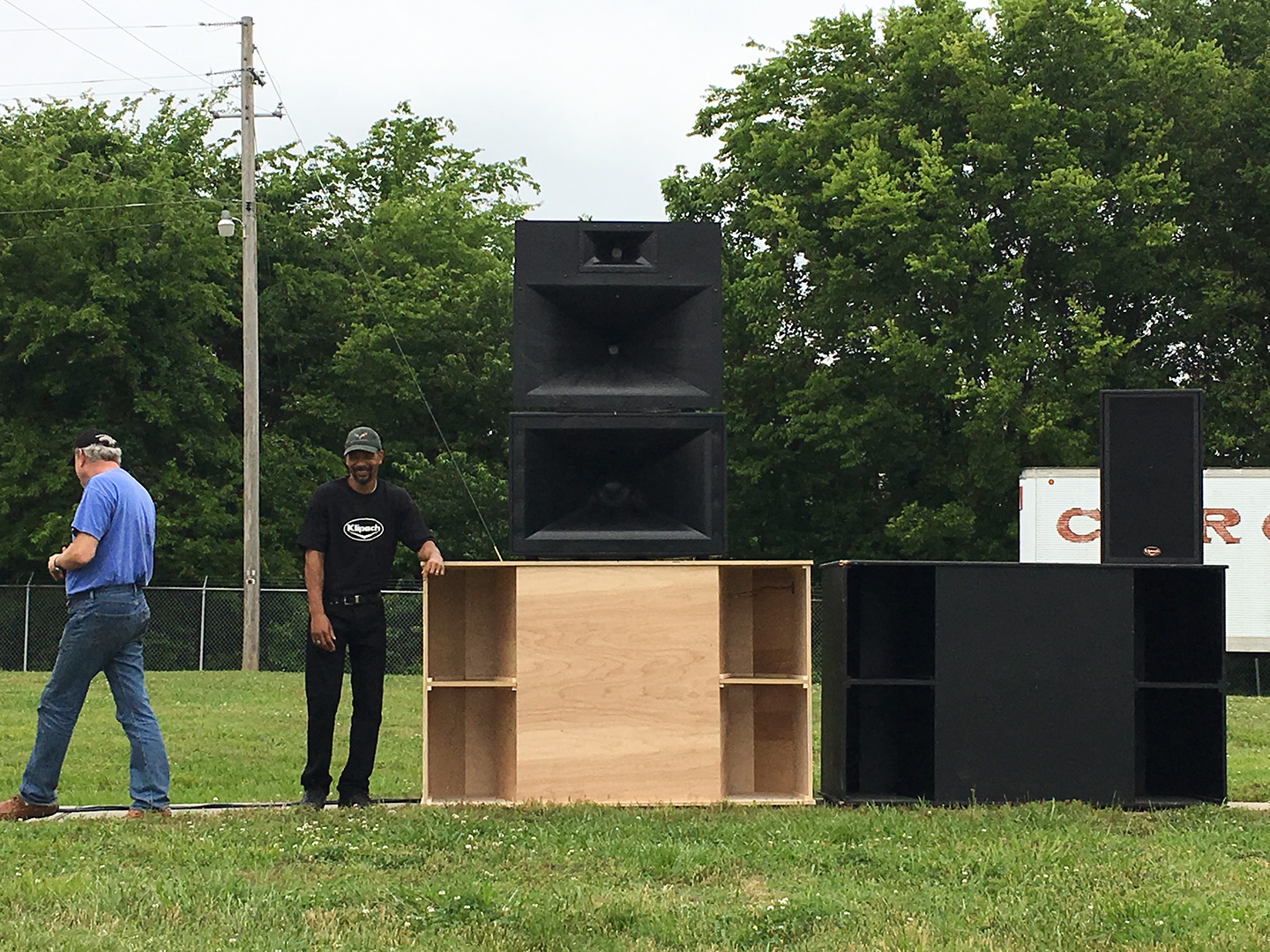 As a special treat for the pilgrims, everyone was invited to check out an auditory comparison of the Klipschorn, Palladium P-39Fs and Reference Premiere RP-280Fs. Despite being over 70 years old, most listeners chose the Klipschorn as their favorite; however, each set of speakers showed off their own unique, magical characteristics.

Outside the factory a gargantuan KPT-Cinema Grandeur system accompanied by 1802 subwoofers was set up just for the pilgrims listening pleasure. WOW. That’s all you can really say about a system like that. It’s pretty remarkable. 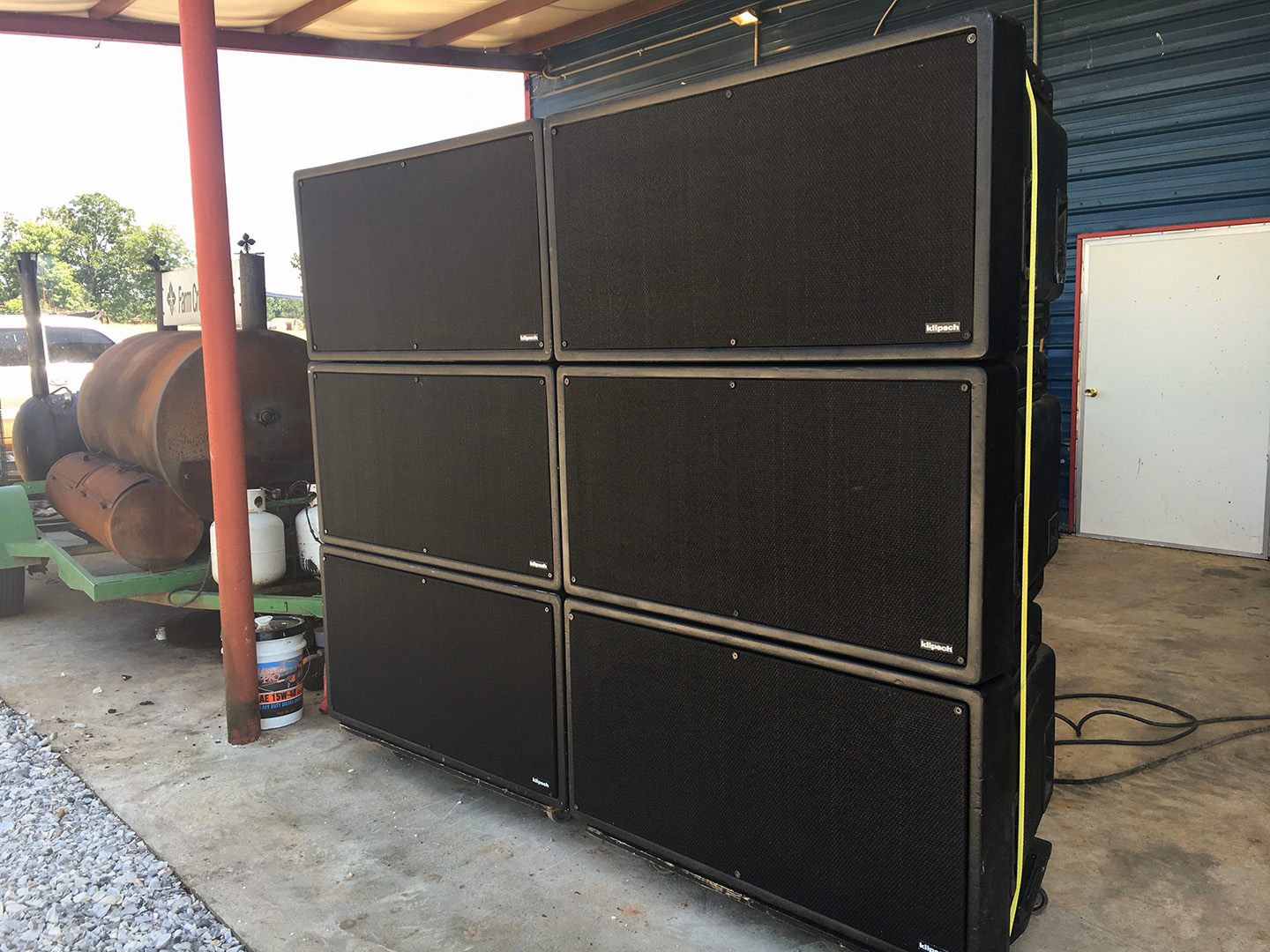 PISSING OFF THE NEIGHBORS

It wouldn’t be a Klipsch event without the authorities being called into play. To prepare for the Jason Helms Band hitting the stage on Saturday, the KP-600 had to be tested out back at Rodney’s to make sure they were ready to rock. After all, Klipsch forums member "kharmonddds" hauled this rare PA system (only a few hundred were ever made) in all the way from Lafayette, Lousiana. Needless to say, the system was certainly up for it.

So up for it, that the police called Rodney’s house, telling him to cut it out. Now, it’s important to remember that Rodney owns 660 acres and lives MILES away from his nearest neighbor. That’s how loud this system is. Crazy!

Of course, it turned out to be all in good fun, as Rodney's neighbor came over to the party and was greeted by those in Klipsch's famous "Pissing Off The Neighbors" t-shirts who gifted him his own "Pissed Off Neighbor" t-shirt. 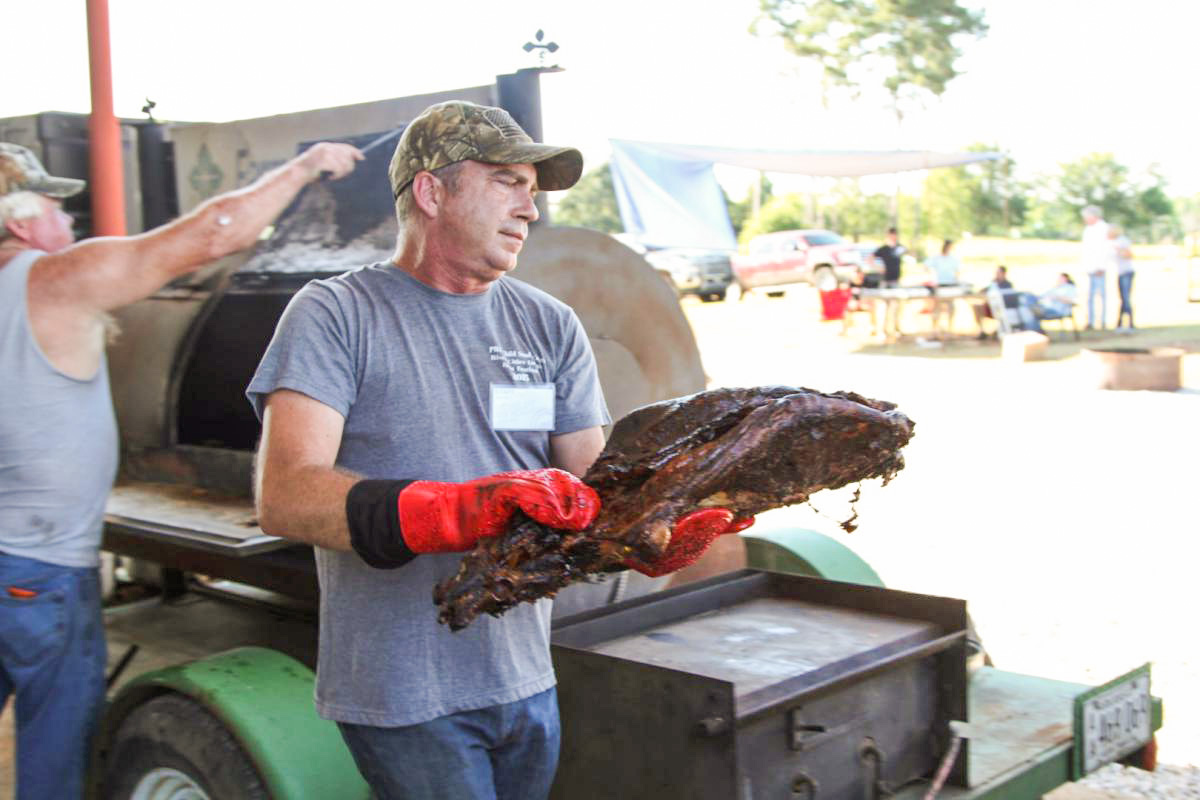 As a special “thank you” for all their hard work, Klipsch employees in Hope were treated to a spectacular lunch spread on Friday, courtesy of the pilgrims in attendance. Rodney smoked over 60 racks of ribs… all of which were voraciously consumed.

We may sound like a broken record, but, again, most companies don’t have customers/fans/friends like Rodney and the rest of the pilgrims. 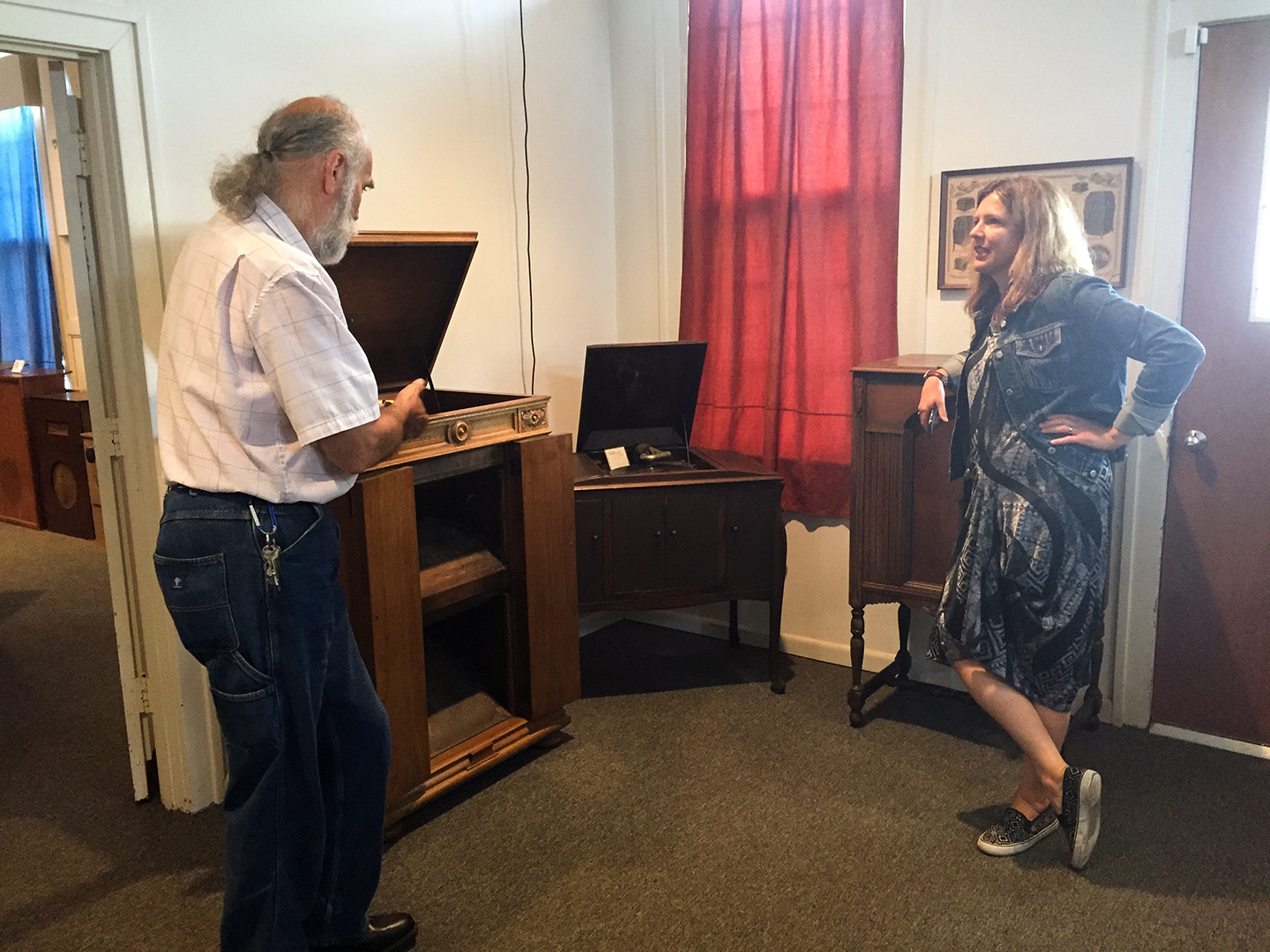 Klipsch historian Jim Hunter is practically a legend at this point. No one knows more about Paul W. Klipsch than Jim. After all, Jim worked for PWK for many years. It’s always a treat to hear Jim’s epic stories for years gone by. 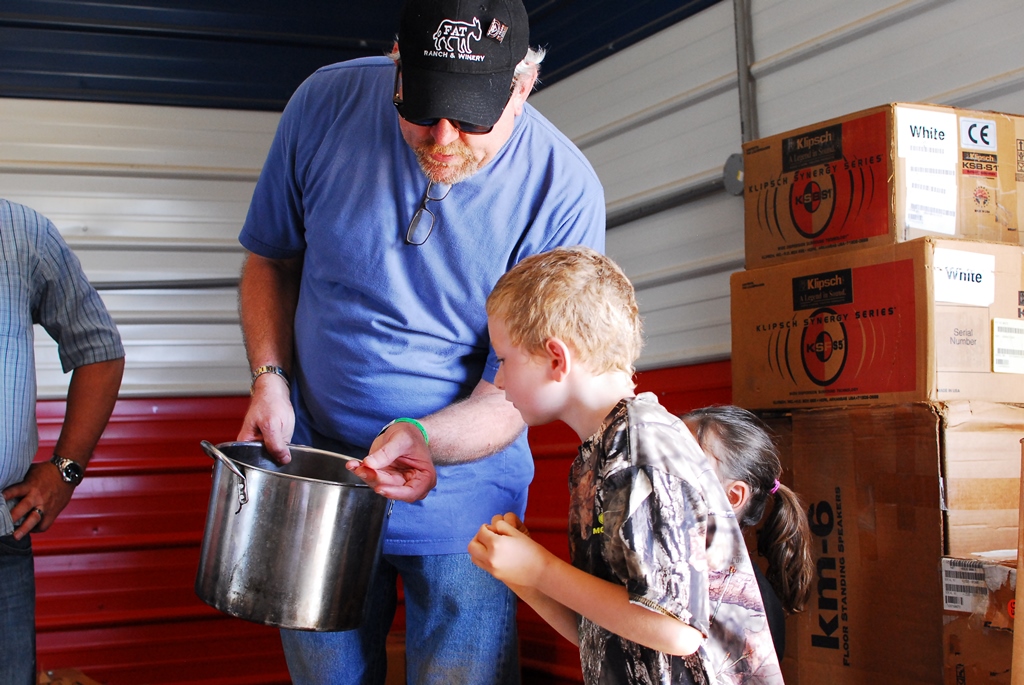 For a long time, we’ve had a stockpile of vintage Klipsch speakers in the warehouse next to our headquarters in Indianapolis which we have lovingly called “Judy’s Stash”. Judy Klipsch, who is the wife of Fred Klipsch, kept one of every speaker that we made while Fred Klipsch was CEO of the company.

We wanted to give the product good homes but weren’t quite sure the best way to do that. We finally realized the Klipsch Pilgrimage would be a perfect opportunity to raffle off this massive collection of speakers and subwoofers. Quite a few people left Hope, AR this year with a speaker they will treasure forever. 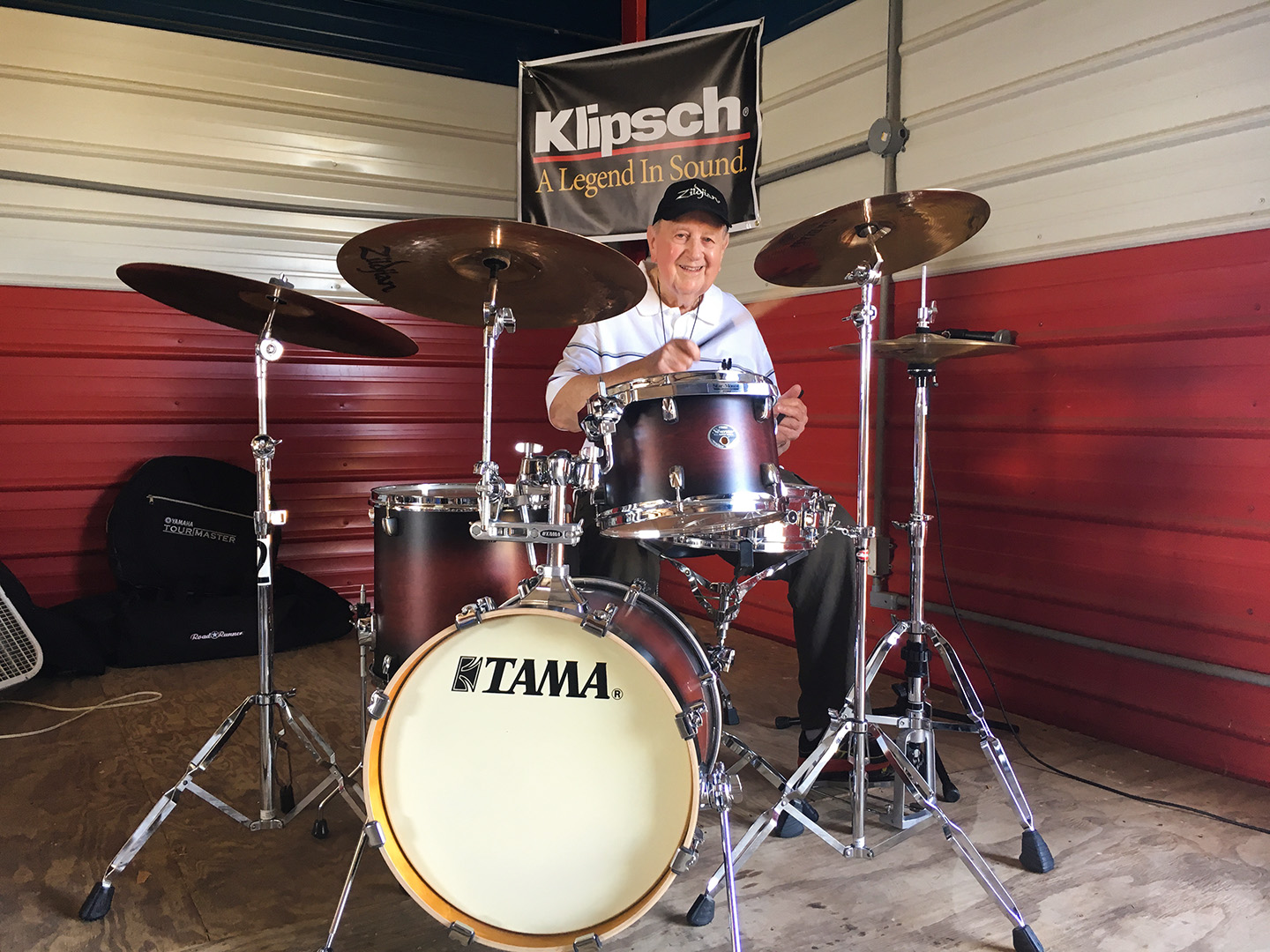 If you read the latest "Good Poop" Jim Hunter, you would have learned about the connection between legendary drummer Joe Holland's relationship with Paul W. Klipsch. Holland, who was the drummer for the Bob Hope Band, was on hand in Hope to play the exact set he did for the famous Klipschtapes - all at the age of 88! 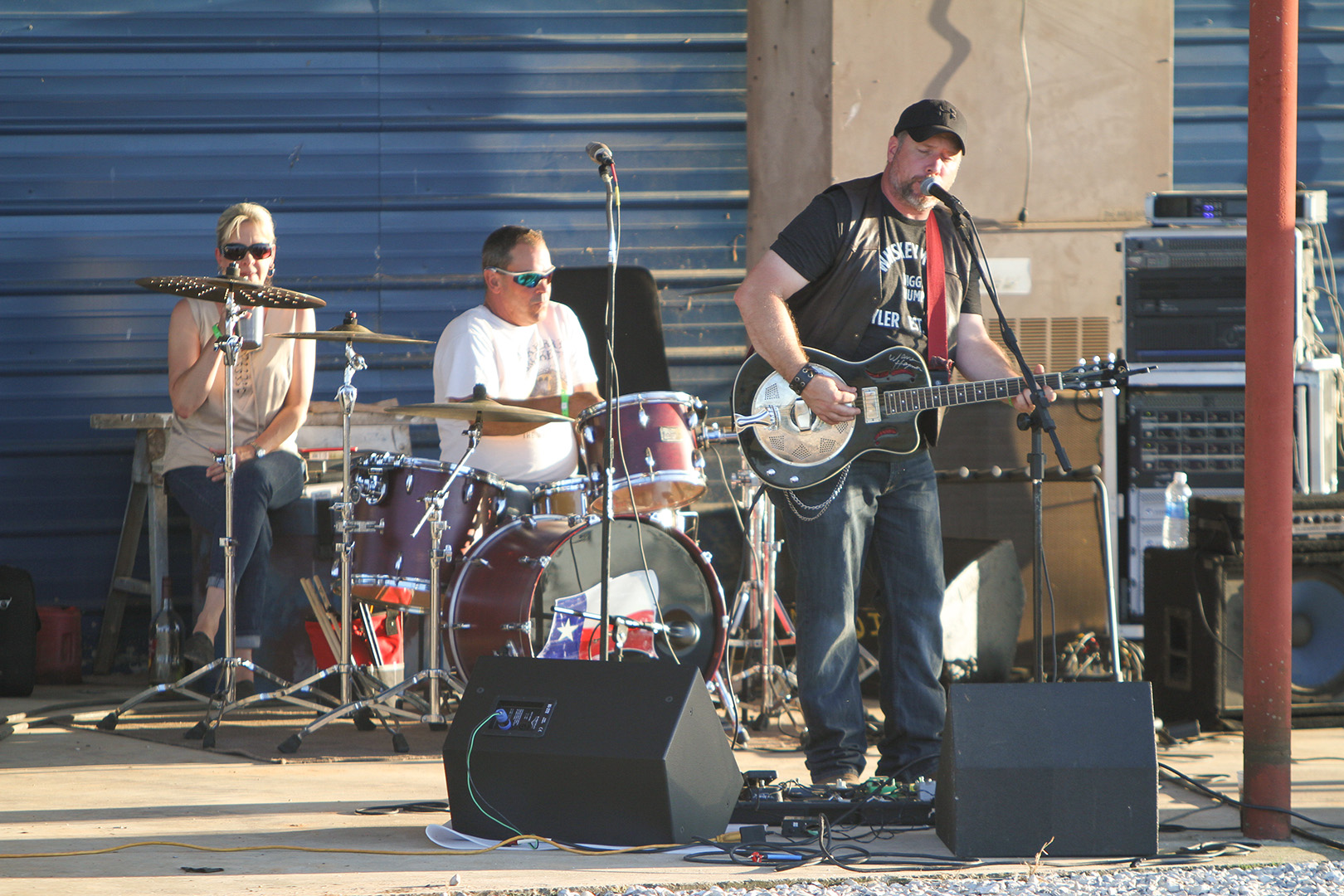 THE KLIPSCH VERSION OF WOODSTOCK

On the second day of the Klipsch Pilgrimage, Rodney’s property could have been mistaken for some crazy Klipsch version of Woodstock.

This is the part of the journey where things turned into more than a mere factory tour. It became a celebration of community, as everyone enjoyed each other’s company, engaging in a variety of activities. There were people fishing, skeet-shooting, flying drones, having a drink (or six) and swapping stories, among other things.

To cap it all off, the Jason Helms Band – longtime Klipsch fans – came on by the farm to crank things up on the KP-600 PA System. Everyone sat around in their lawn chairs, enjoying the awesome music, crackling fire and starry night overhead.

It all sounds rather simple and kind of gives you that warm fuzzy feeling inside. 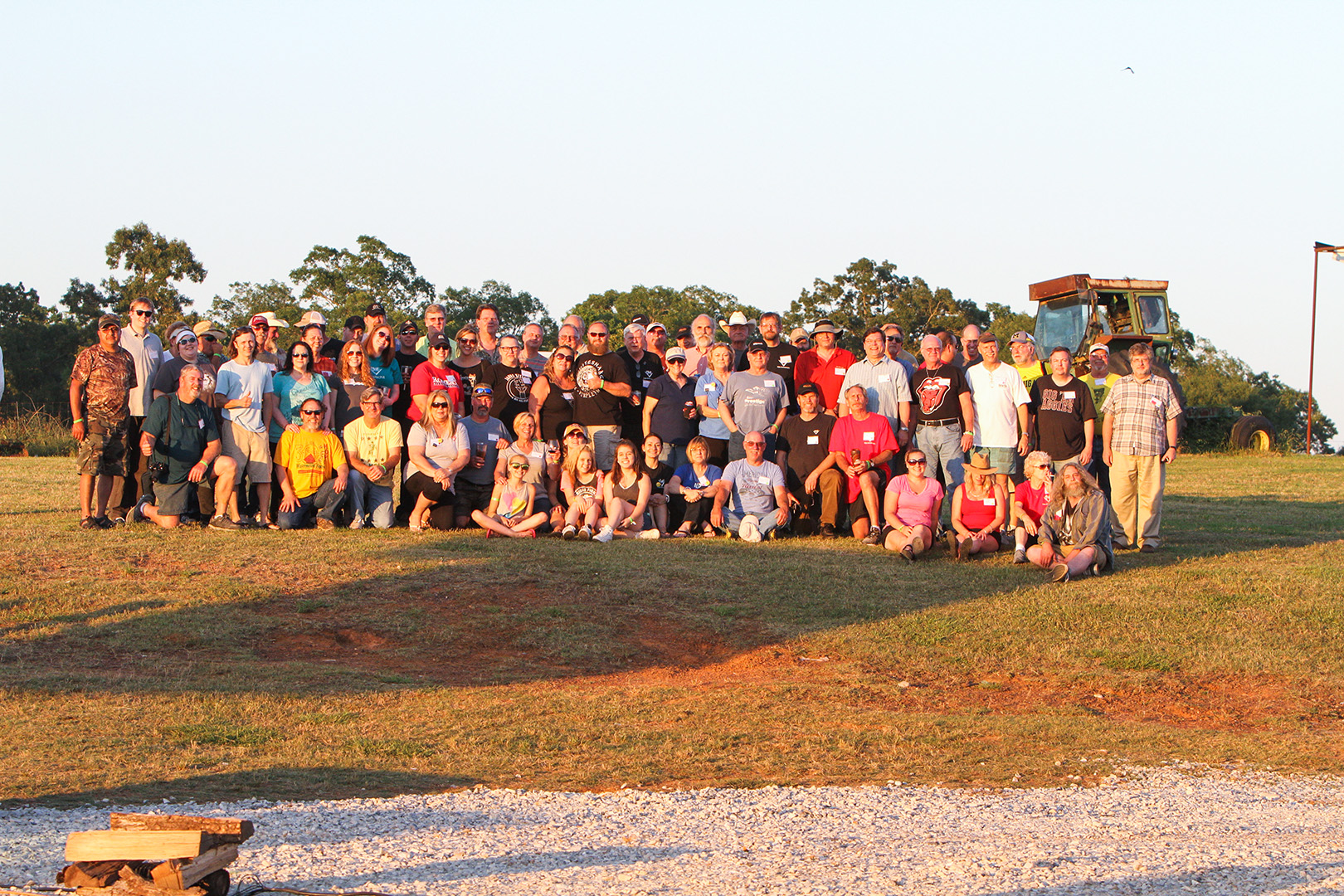 WHY THE KLIPSCH PILGRIMAGE MATTERS

Where to start? There are a myriad of reasons why the annual Klipsch Pilgrimage is an important event, for both the company and its customers/fans/friends.

As employees it’s a humbling experience and we are so thankful to be part of this one-of-a-kind opportunity. We cannot state how exciting it us to stand beside our fans that are willing to travel hundreds of miles to feed employees and to experience our products first hand – all at their own expense. It’s reinvigorating, knowing that the products you make can have such a profound effect on people’s lives.

Furthermore, the Klipsch Pilgrimage allows us to stay in touch with the core base of our fans that have been with us since the beginning – or close to it. While the types of products may change, it is infinitely important to remember what got Klipsch to where it is. The Klipsch Pilgrimage and its attendees are a sort of watchdog for the company in that way. Just like Paul W. Klipsch, they are ready to say “bullshit” when called up. 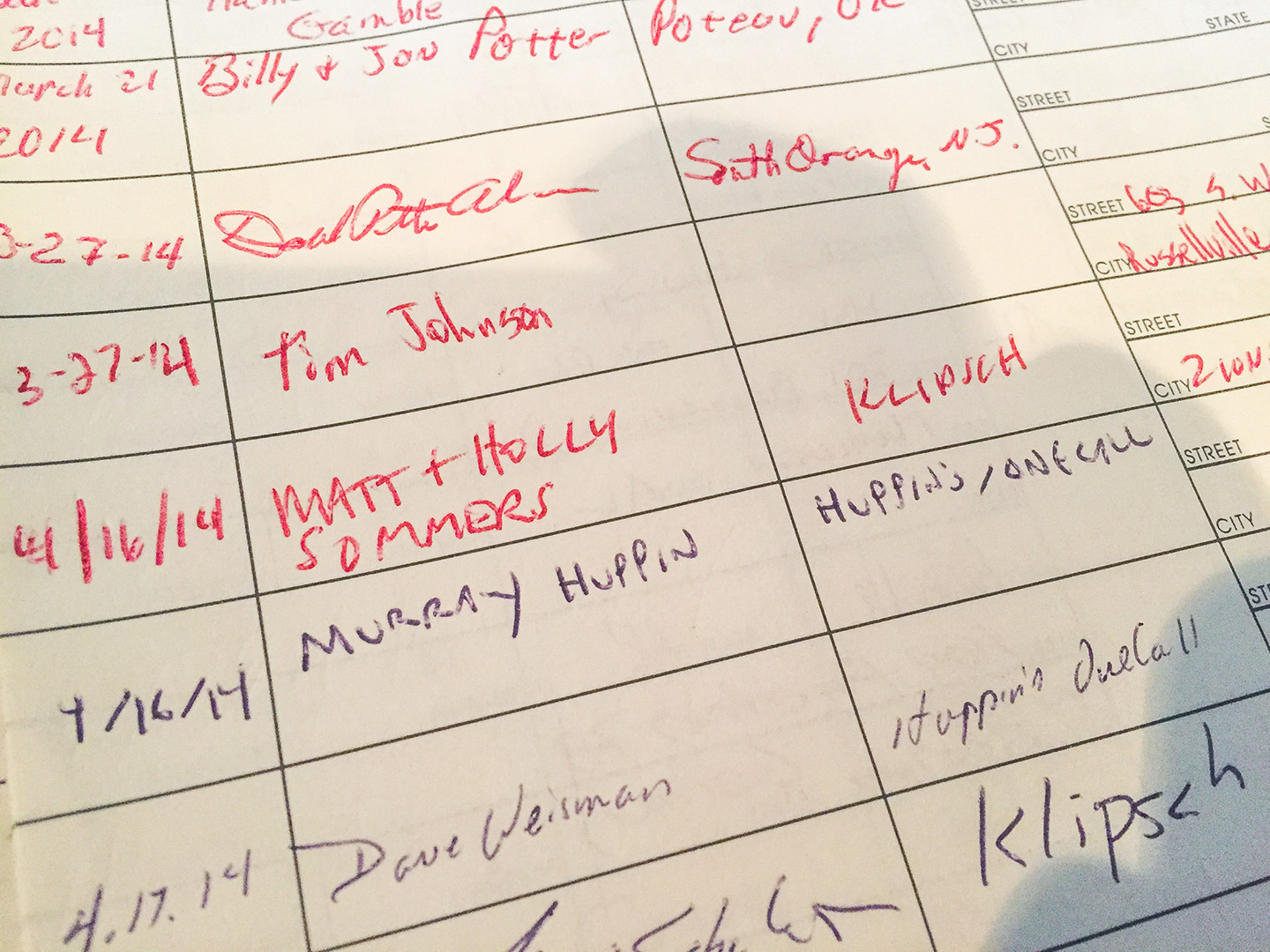 Interested in going to the Klipsch Pilgrimage next year? Make sure you sign up for the Klipsch Forums and bookmark this sub-forum. We will also blog/Facebook/tweet/MySpace about it as well, but the forums are the first place you’ll see registration information, dates, etc.

Categories: Made in America Pilgrimage