Chances are you know who Elijah Wood thanks to Lord of the Rings, Flipper, Wilfred and Sin City, among other films and TV shows, but what you might not know is that he is massive Klipsch fan and customer. He is the proud owner of each of the Klipsch Heritage speakers including some really sweet vintage La Scala speakers.

Now, we must state that we have no official relationship with Elijah Wood. It’s merely a mutual fondness for each other’s work. You could even say that a prophecy has been fulfilled…

It all started when Klipsch tweeted a nerdy Lord of the Rings joke in regards to the Klipsch X7i in-ear headphones. While I cannot drudge up the tweet right now, I remember that it was some sort of semi-humorous “my precious” reference. Unbeknownst to me (and the rest of the Klipsch team), Elijah Wood was following @KlipschAudio on Twitter. He saw the tweet, despite not being tagged or referenced specifically and responded enthusiastically at the attempted joke.

We then started “DMing” (direct, private messaging) on Twitter and it came to light that he has been a Klipsch fan for a long time and a proud owner of the famed Klipsch La Scala speakers. He even sent as a photo of the card on the back of the La Scalas which is signed by the individual craftsmen who built his speakers. Elijah’s La Scalas were inspected by Jerry White and tested by Judy Clayton.

As we learned more about Elijah, we learned he is truly a devoted audiophile who has the very best equipment across the board and has a deeply-rooted passion for DJing. His passion was stoked by his close friendship with fellow DJ Zach Cowie who is another massive fan of Klipsch Heritage Speakers and got Elijah hooked on them. The Vinyl Factory got to go inside Elijah and Zach’s record room, where the two talked about their massive record collection in front of Klipschorns. Zach even used a vintage PWK mug in the short film that he picked up over eBay for a sum he doesn’t want you to know. Without knowing their relationship, we actually did a profile on Haley Solar, owner/founder of fashion label Junim LA, who is Zach’s girlfriend and a proud owner of vintage Heresy speakers thanks to Zach.

Without meaning to sound arrogant, it isn’t exactly uncommon for there to be somewhat-secret celebrity fans of Klipsch speakers and headphones. After all, we think our equipment is the best choice for people who are serious about their sound which would include many/most people involved in the movies and music industries. This particularly comes to light at events such as the Rock & Roll Hall of Fame Induction Ceremony presented by Klipsch Audio, where we are able to talk one-on-one with some of the biggest stars in the business.

What makes our friendship with Elijah a little more uncommon is that he goes out of his way to help promote Klipsch products. He frequently retweets Klipsch posts about the company’s famed Heritage speakers. Responding to our comments, questions and requests in a timely manner, Elijah is always willing to hear us out and even plays along with our silly jokes. 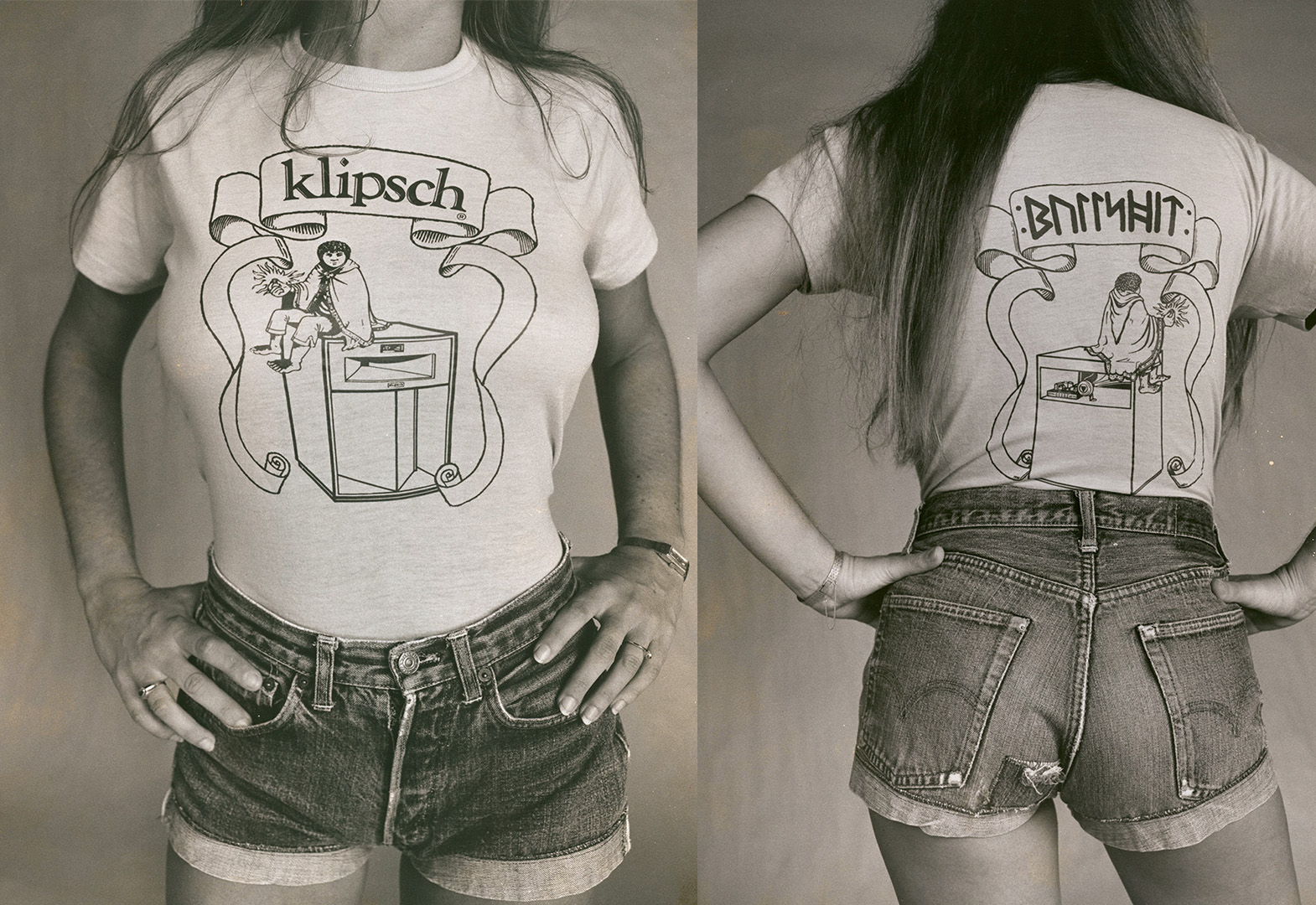 One of those such jokes is one that is dozens of years in the making. In the 70s, Klipsch produced a bunch of t-shirts to help promote the La Scala speaker. These vintage t-shirts actually go for quite a bit of money these days on Ebay. Check out one listing here.

On the front of the shirt sits a hobbit on top of a La Scala with Klipsch lettering. On the back you can see the back end of both the hobbit and the speaker with the word “Bullshit” spelled out in some form of the elvish language.

You have probably picked up on the delightful coincidence. THE hobbit – Elijah Wood – is a fan of the La Scala speakers displayed in the shirt. We could never have imagined that when we originally produced the shirt.

When we tweeted Elijah a picture of the vintage t-shirts from an old marketing campaign and he got a big kick out of it. He wanted one of those shirts! Sadly, few of these shirts are available apart from the few that pop up here and there on eBay as mentioned previously.

Partly thanks to Elijah’s request, Klipsch decided to come out with a “reissue” of the shirt. Instead of blue and white, the shirt is in the company’s now signature colors of black and gold. We sent one over to “Frodo” who immediately had a friend take a picture of him with the shirt on and on top of his own La Scalas, tweeting it out to his hundreds of thousands of followers.

Thus, the 40-year-old prophecy had been fulfilled. 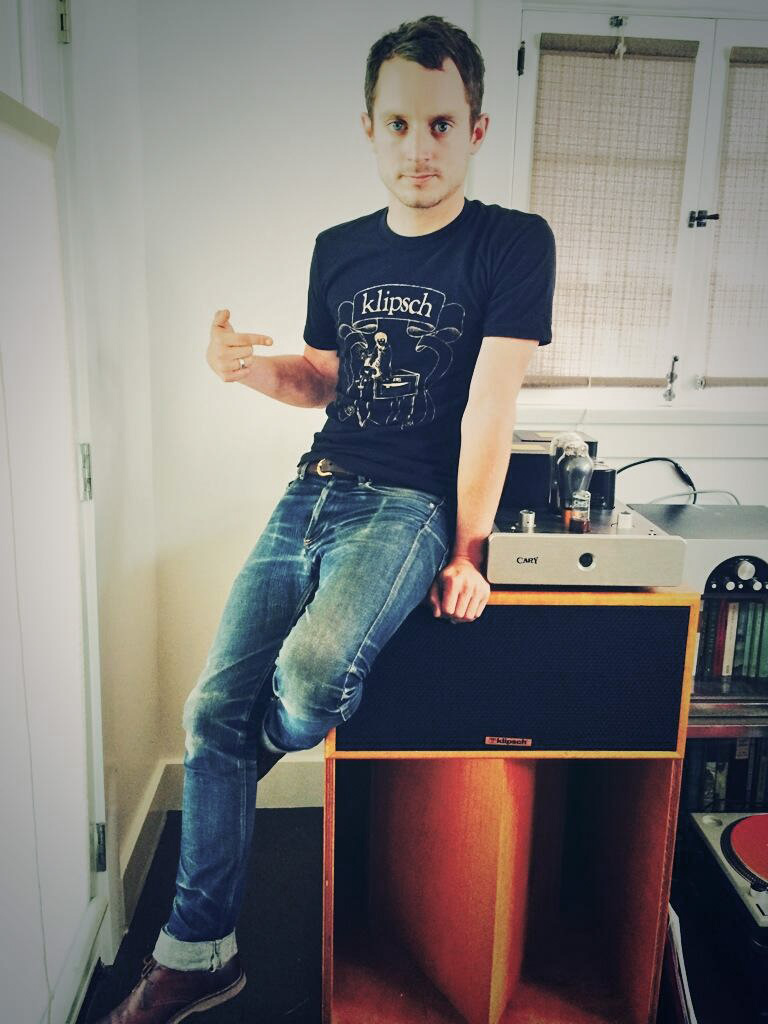 Do you think it is as cool as we do that Elijah Wood loves Klipsch speakers? Post in the comments!