With 2016 serving as our platinum anniversary, we decided to do something special to honor the proud history of Klipsch. We have created limited editions of two of our favorite designs

In celebration of our 70th Anniversary, we are handcrafting an exclusive, limited edition of the Klipsch Heresy III speaker, available now at Klipsch.com and through select retailers. The 70th Anniversary Klipschorn will follow in May. Both are stunning tributes to Paul W. Klipsch’s timeless designs.

Our craftsmen in Hope, Arkansas only made 70 pairs of each model and they will be gone before you know it.

Introduced in 1957 and now in its third iteration, the Heresy is a compact, three-way loudspeaker utilizing a 12” woofer and horn-loaded midrange and tweeter. It was originally intended to be a center channel for the Klipschorn speakers; however, they quickly stood on their own merit.

While the design of the speaker has remained remarkably similar to the original, the Heresy III was given a substantial upgrade in recent years to include a more powerful woofer, bi-wire network, as well as midrange and tweeter compression drivers, featuring a titanium diaphragm for smooth and accurate definition.

Audio enthusiast and reviewer, Steve Guttenberg calls the Heresy III “a rock’n’roller’s dream speaker” in a Stereophile editorial. He expounded upon this praise of the Heresy in a post on his CNET.com blog: “The sound in my listening room was closer to a live rock concert sound system than I’ve heard from a lot of much more expensive and bigger speakers. That’s what the Heresy IIIs do so well, and once you experience that sort of sound at home, a set of Sonos wireless speakers won’t cut it anymore.”

The 70th Anniversary edition of the Klipsch Heresy speaker maintains its own character that will make it remembered for long after we run out of inventory, which may be very, very soon.

Here are its new features. 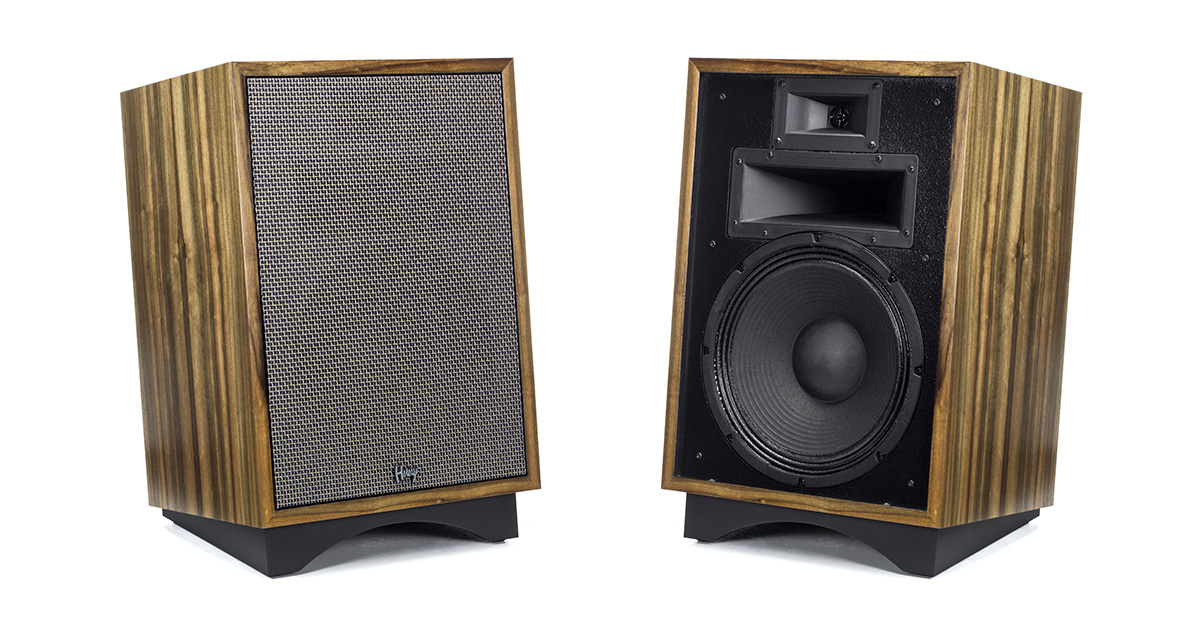 While the standard Heresy III comes in cherry, walnut and black ash, the 70th Anniversary Hersey III features an Australian Walnut wood veneer that is a total showstopper.

Coming all the way from the costal tablelands of North Queensland, Australia, this limited edition of wood veneer varies in color but is usually a pale-golden hue highly contrasted with darker streaks of chocolate brown, grey, black or even pink. 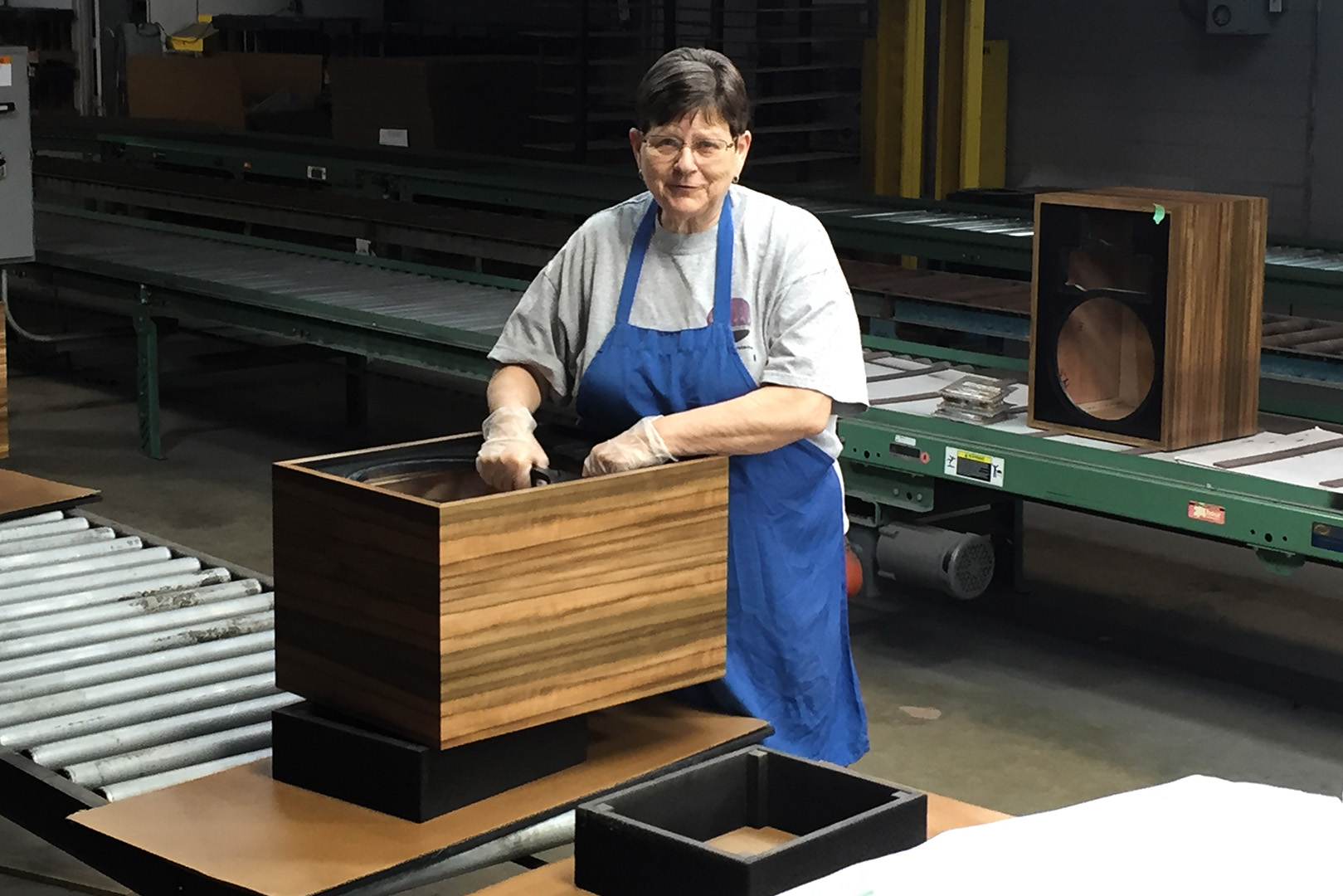 Every pair of 70th Anniversary Heresy speakers uses book-matched wood veneers. So, what does that mean? It means that the veneer leaves are kept in order as they are delicately sliced from the timber and precisely arranged to provide a mirror image at the splice joint – like turning the pages of a book. This gives each pair of speakers an aesthetically pleasing and consistent appearance that is treasured more than any other cut of wood veneer.

In addition, every cabinet is carefully matched so that each speaker in the pair is practically indistinguishable from the other. The speakers move seamlessly together through the factory. Each finished product is inspected and labeled with sequential serial numbers, ensuring that the Heritage series speakers leave the factory as a meticulously crafted set. 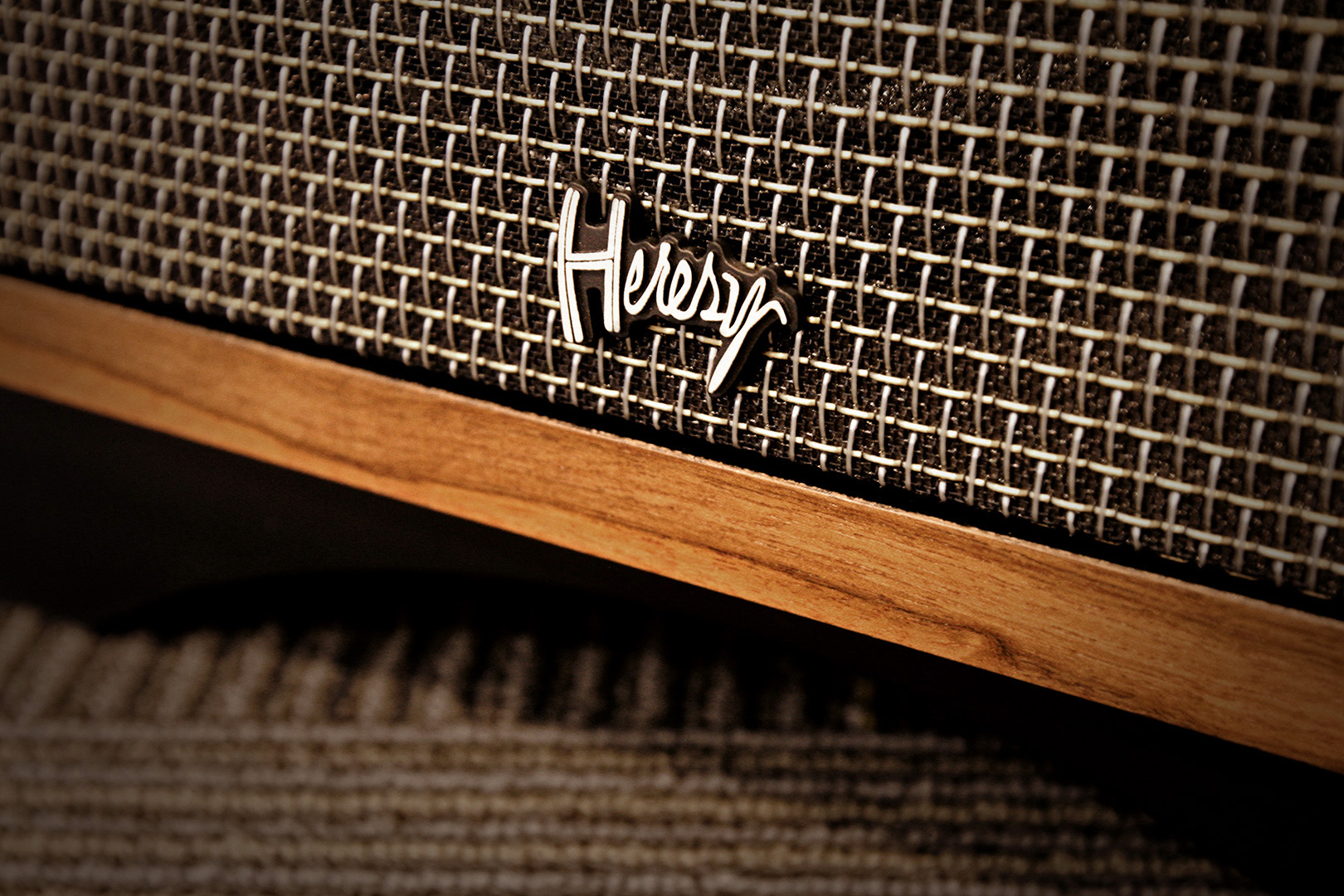 Heresy owners (and fans) may note that the speaker typically comes with the iconic PWK badge in the top left/right of the speaker. We changed it up a bit for the 70th Anniversary with a curvaceous Heresy nameplate that harkens back to Klipsch logos from years past. 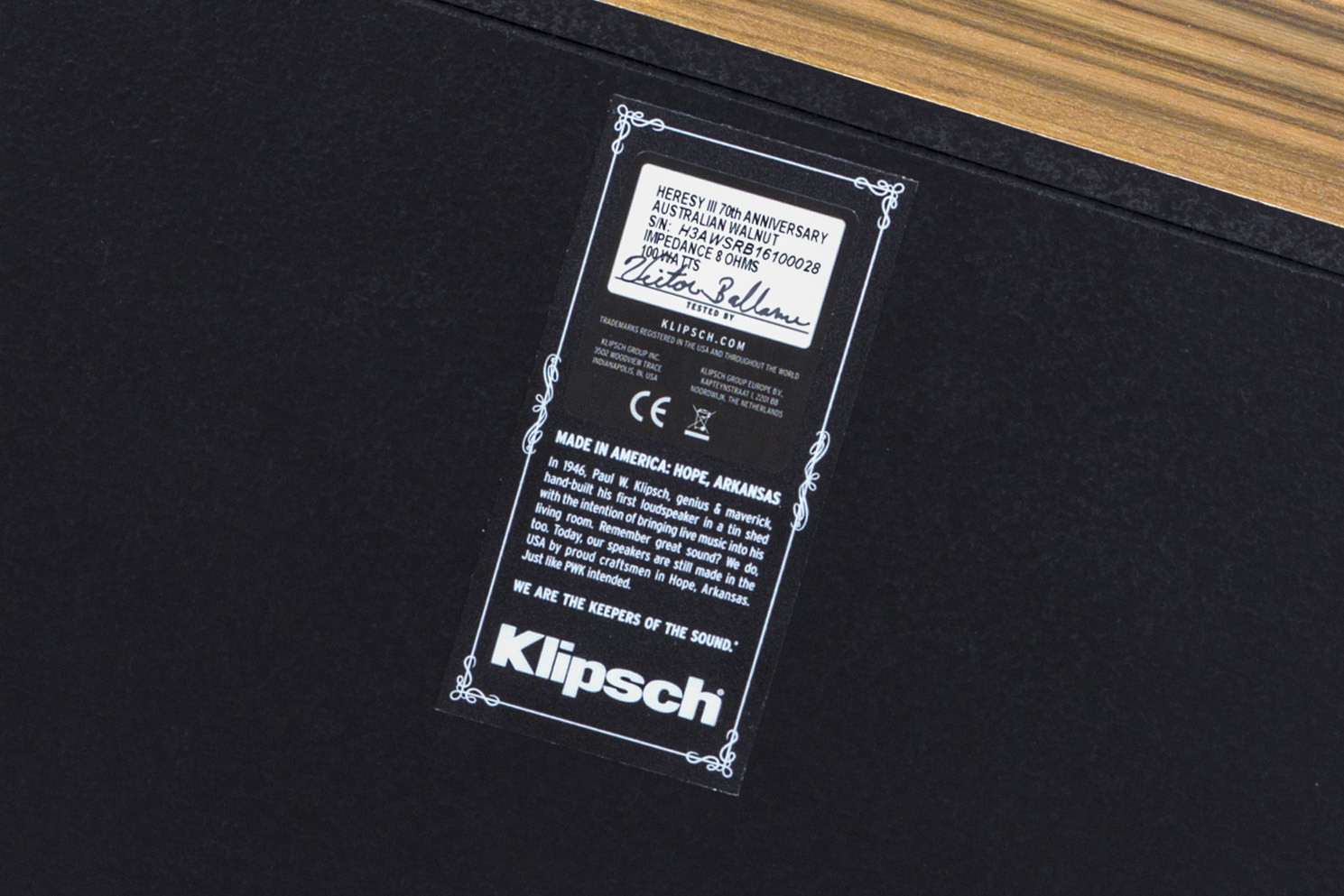 Each speaker also features a small plaque identifying its numbered sequence in the series and has been signed by its craftsman. 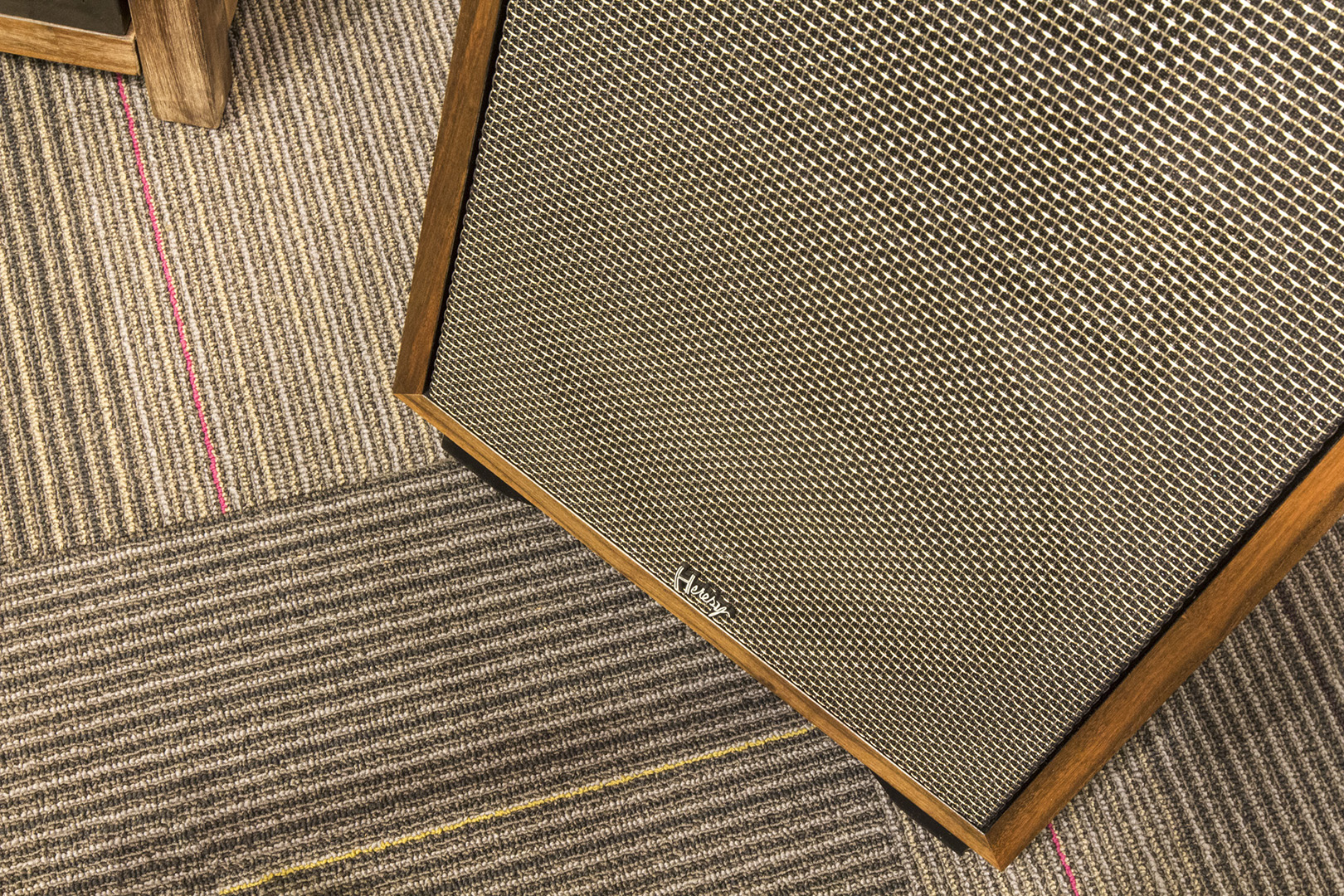 The fancy new nameplate is mounted to an eye-catching silver luster grille cloth that you haven’t seen anywhere else. It looks sort of like a metal mesh, which gives the speaker a rather distinct personality. Again, this is a special edition cloth is a feature reserved for the 70th Anniversary Klipsch Heritage speakers. 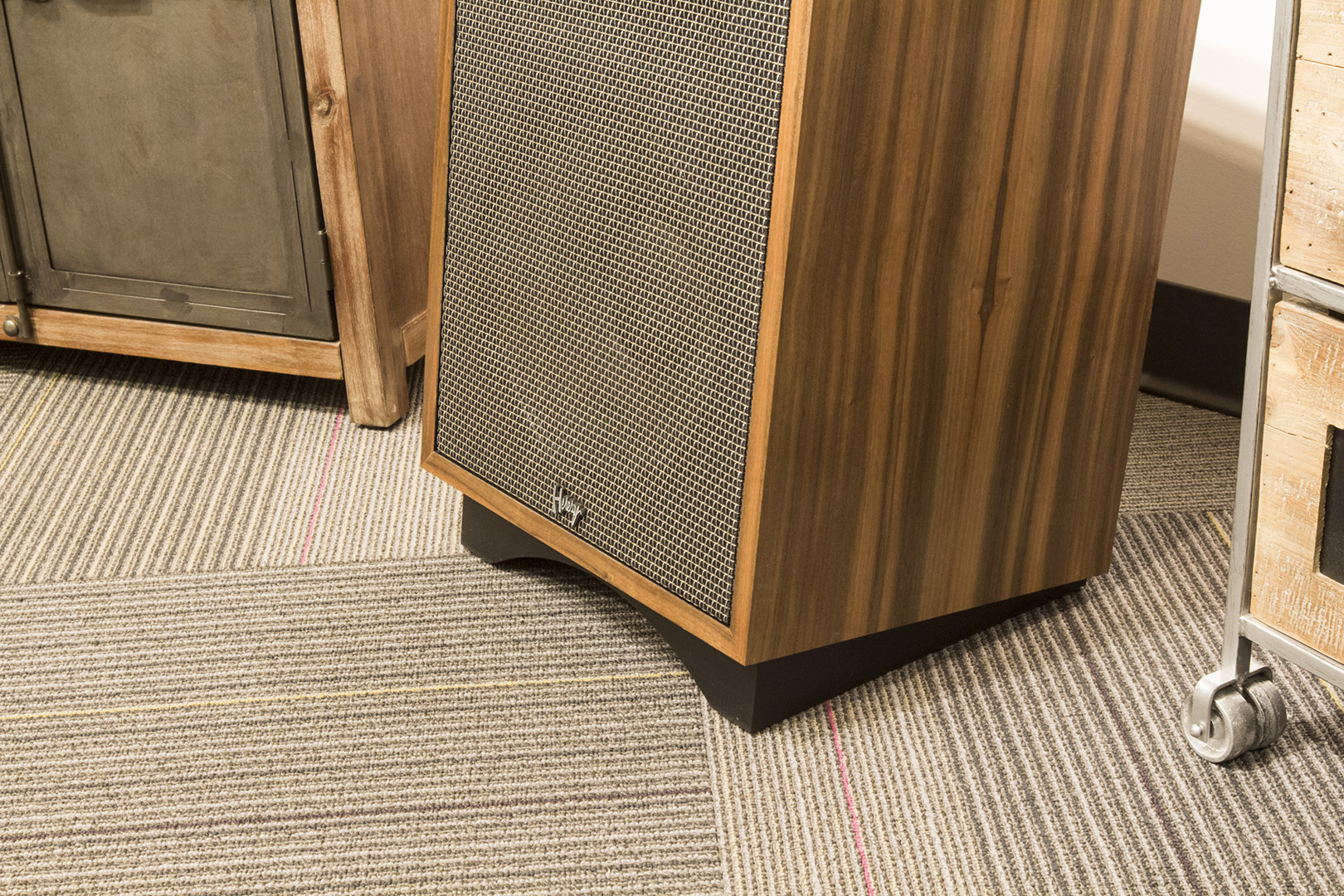 You may have also noticed the contrasting matte-black slant risers which are only available on the 70th Anniversary Heresy III speakers and a perfect complement to the Australian Walnut wood veneer.

Have any questions about the 70th Anniversary Heresy III speakers? Ask them here!

Categories: Made in America Speakers