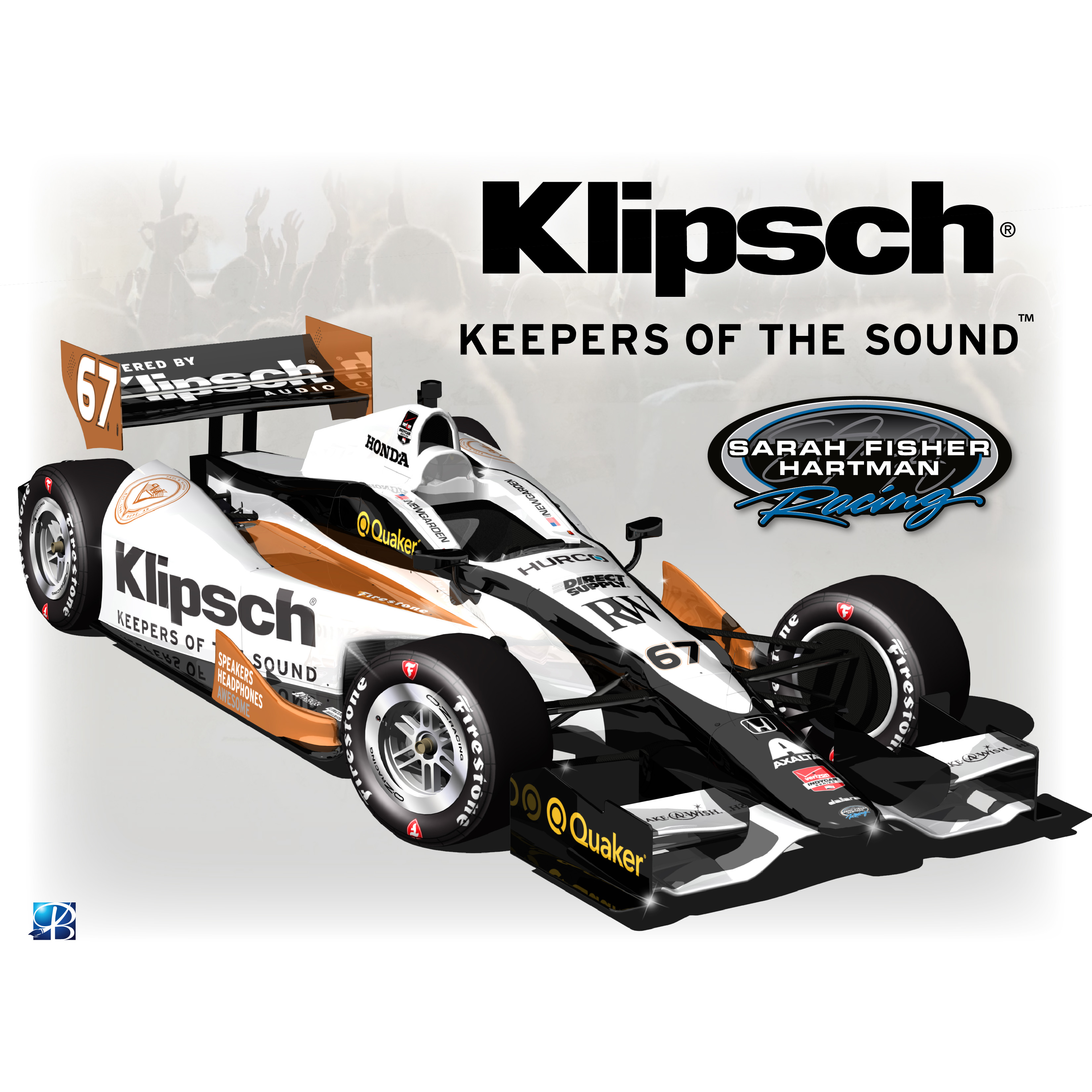 INDIANAPOLIS (April 30, 2014) — Klipsch, a leading global speaker and headphone manufacturer, announces today that it will serve as the primary sponsor for Sarah Fisher Hartman Racing (SFHR) on its No. 67 entry for Indianapolis’ inaugural Grand Prix on Saturday, May 10. The brand has served as an associate sponsor for the Verizon IndyCar Series team since 2013.

Professional racecar driver and Klipsch brand ambassador Josef Newgarden will drive the No. 67 Klipsch Dallara/Honda/Firestone car in the first IndyCar race on the Indianapolis Motor Speedway’s (IMS) 16-turn permanent road course. The event will open the renowned “Month of May” at the IMS. Klipsch included Make-A-Wish® Foundation logos on the IndyCar as its philanthropic efforts make local children’s dreams come true.

"Bringing Klipsch as the primary sponsor to the inaugural Grand Prix will be fantastic, especially with its headquarters located here and the excitement around this particular event,” said Sarah Fisher, co-owner of SFHR. “We are thankful for their increased involvement and know both SFHR and Klipsch will share the benefits of this great partnership in Indianapolis.”

“Serving as the primary sponsor of Klipsch brand ambassador Josef Newgarden during Indianapolis’ inaugural Grand Prix will be a legendary moment for our company,” said Paul Jacobs, CEO of Klipsch. Klipsch CEO Paul Jacobs said. “Our relationship with the SFHR team has given us a direct link to the sport and its fans for which our headquarter city of Indianapolis is most known. We look forward to the upcoming race, as well as the continuation and growth of our partnership.”

Klipsch will use Newgarden’s image on a full-size advertisement at the Indianapolis International Airport, creating increased exposure for the company’s premium products to fans flying to Central Indiana for the Grand Prix of Indianapolis and the 98th Indianapolis 500 on Sunday, May 25.

For more information on the Klipsch brand and its product offering, visit http://www.klipsch.com.

For over 65 years, Klipsch has designed premium speakers for those who are passionate about great sound. Company founder Paul W. Klipsch started this legacy in 1946, and it continues today with sheer commitment to innovation and delivering the world’s most powerful, detailed and emotional sound reproduction. Today, the brand’s diverse product portfolio encompasses home theater, professional cinema, installed whole-house contracting, commercial, computer speakers, iPod® docks and headphones. As one of the first U.S. loudspeaker companies, Klipsch continues to be the high-performance brand of choice for audiophiles and home theater aficionados around the world. Klipsch Group, Inc. is also a wholly-owned subsidiary of VOXX International Corporation (NASDAQ: VOXX).

Sarah Fisher Hartman Racing (SFHR) was established in 2008 and is owned by former driver Sarah Fisher, the youngest woman ever to compete in the Indianapolis 500 and the first woman to run a full Verizon IndyCar Series schedule, and businessman Wink Hartman. SFHR has competed in the Verizon IndyCar Series since 2008, earning its first victory in 2011 at Kentucky Speedway.