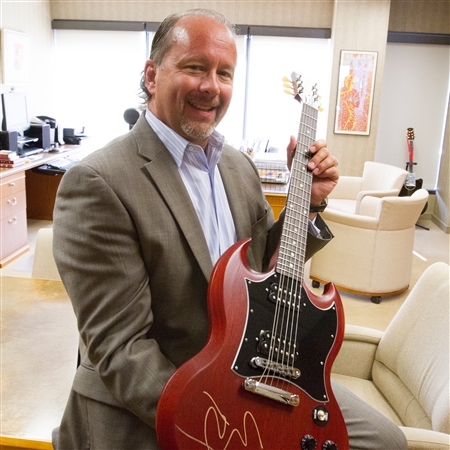 INDIANAPOLIS (January 21, 2014) — Klipsch Group, Inc., owner of the Klipsch, Energy and Jamo audio brands, today announces that company CEO Paul Jacobs has been named a 2014 inductee into the Dealerscope Hall of Fame. With more than 20 years of experience from within the company, Jacobs has worked his way through the ranks and earned a reputation as a trusted and respected leader in the audio industry.

“First presented at Winter CES 1991, Dealerscope's Hall of Fame award recognizes individual contribution to the consumer electronics industry,” said Eric Schwartz, president and publishing director of Consumer Technology Publishing Group. “Such contributions are made in many forms. The Hall of Fame honors not only the industry's veterans, but also its innovators, the visionaries and the deal makers—those who pursue a standard of excellence. Paul Jacobs represents the entire spectrum of ambition and achievement.”

With Jacobs at its helm, Klipsch Group has taken significant steps in its product development and marketing efforts. He has helped the company enter numerous new product categories including soundbars, wireless speakers and gaming headsets while continuing advanced innovation on the company’s original core business of loudspeakers.

In addition to leading the charge during the sale of the company to VOXX International Corporation, Jacobs has helped Klipsch Group experience its most profitable years under his leadership.

Prior to being named CEO in March 2011 upon the company’s acquisition, he served as president and chief operating officer of Klipsch Group and was responsible for all company operations. In years past, he progressed through several executive level positions at Klipsch, including president of the Klipsch and Jamo brands, executive vice president and chief operating officer, company vice president and vice president of worldwide sales. He first joined Klipsch as a manufacturer’s representative in 1991 after working as sales manager for Lyons & Associates, a consumer electronics rep firm, and as regional sales manager for Fretter Appliance. Altogether, Jacobs’ career represents significant retail, manufacturing, sales and management experience totaling over 30 years.

“It is a great honor to be associated with the renowned individuals that make up the Dealerscope Hall of Fame," said Jacobs. “I have dedicated my career and passion to this company, our brands and to the relationships with our valued employees and partners. With a talented team around me, I look forward to creating continued successes together and guiding the company to the next level.”