A Product of Divorce: Reference Speakers

Divorce is a terrible thing…unless it ends up with someone getting the best Klipsch Reference Speakers in the world at a bargain price.

Michael Stevens shared his story on the Klipsch Forum (where he is a moderator) and agreed to share his story on The Klipsch Joint. Read his tale below…

Recently, I met a lady with the intent to purchase a pair of original Klipsch Reference RB-81's for $208 (for me) and an original RC-64 for $433 (for my friend Wake Junkie). She also had a pair of RS-62 II but I wasn't really interested in them. Before going, she told me what she would accept for the three speakers and what she would take for all five speakers. I brought enough cash to purchase all five but only planned on buying the RB-81's and RC-64.

When I arrived, to my surprise, I quickly realized these aren't the original versions....they are Reference II speakers! She explained that she was recently divorced and she just wanted her ex-husband's speakers gone from her garage. Before gladly handing her the money – and still in disbelief – I confirmed the amount she said she would take and that I would be receiving the RB-81 II, RC-64 II and the RS-62 II speakers. When I mentioned the RS-62 IIs, she said “No, those aren't included in the price I gave you. Those were expensive. I was talking about the big speakers".

I didn't know she even had "big speakers" for sale.

She walked over to the big speakers and I asked what model they were and she said, "They say RF-7 on the sticker".

I was about to flip out! 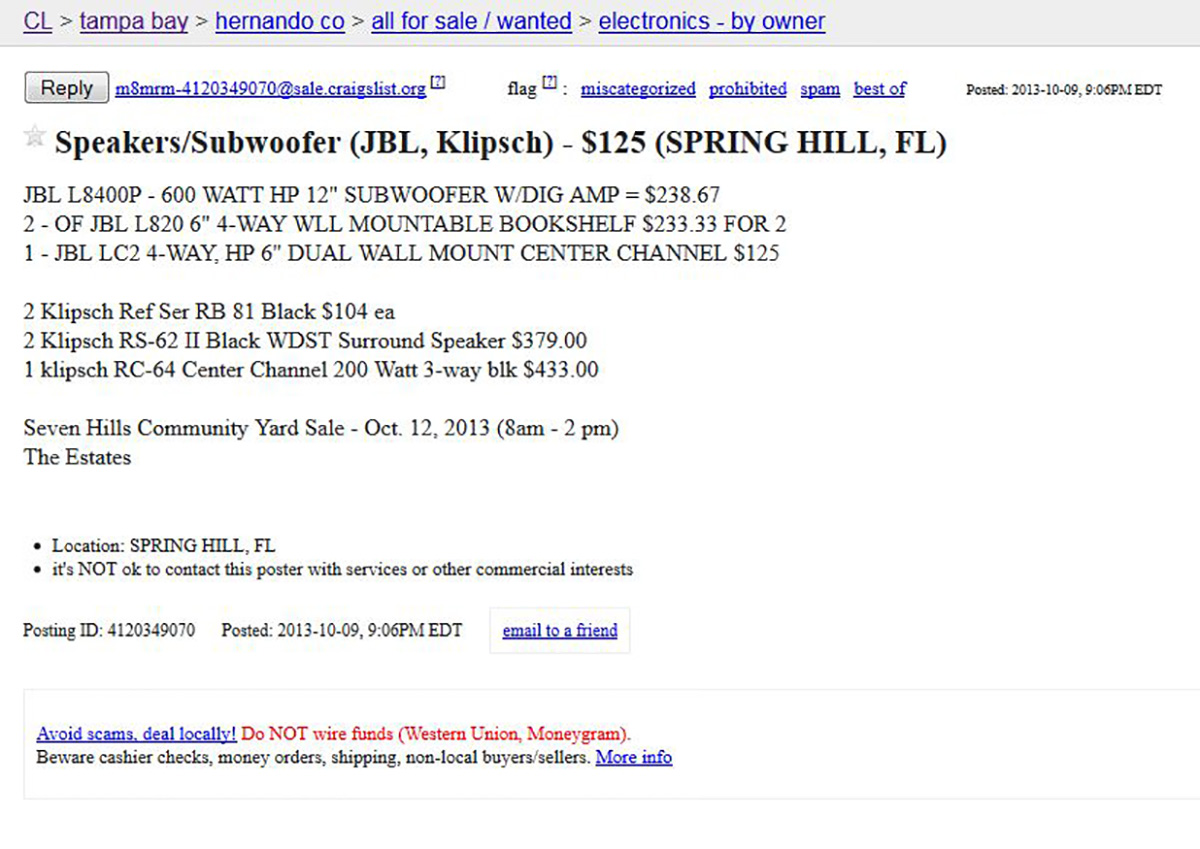 The original posting on Craiglist for the speakers.

As we were wrapping up, I noticed an Onkyo NR-808 receiver and asked if it was for sale. She said “yes.” I'm guessing it too is just “taking up space.” so I figured, "what the heck.” So, I asked "If I pay your asking price, would you be willing to throw in the Onkyo Receiver?” Without hesitation, she replied, "It was expensive but yes, you can have it".

At that moment, I was beside myself.

I paid her the money and was loading up my Ford Expedition when I picked up the Onkyo box and it was empty. She realized that the Onkyo is at her mother's house and fetched her to get it. I only had a few minutes before I absolutely had to go (my wife didn't even know I was buying speakers).

So with only 10 minutes to get everything loaded, I loaded the last speaker and her mom was not back yet. I had already explained that I was on a tight schedule and MUST leave NO later than 3 PM to give me enough time to get back to meet my wife. At 2:59 PM, I knew I had to go and mom was nowhere in sight so I asked her if I could have one of the pair of RS-62 II speakers instead of the Onkyo receiver and she said "Sure, that's fine."

I was seriously ready to faint.

Before I left, she said she had another person coming to buy the rest of the speakers. I texted her several times that night to see if he had come and got no reply. I knew her neighborhood was having a huge community yard sale, so I couldn't help but wonder if I would be able to purchase the rest of her RF-7 II speaker system.

I went to bed about 30 minutes past midnight but tossed and turned for another 30 minutes. After sleeping on-and-off for a few hours, I decided to just get ready to leave at 6 AM, so I could be at the yard sale when it opened up.

The drive was about one and a half hours away, so I texted her on the way asking how much she would take for the RF-7 II and RS-62 II speakers as well as the RW-10D subwoofer that she also had. I brought the same amount of cash that I had the day before. It seemed like she looked up the value of the speakers again and realized she sold them for much less than she could have because she replied with twice as much as what I paid for the seven speakers the day before.

At this point, I was still in the car and I told her that I was 10 minutes away and I would be willing to offer what I had with me for the RF-7 II and the RS-62 II speakers. She said sorry, but she had a better offer.

I told her I would be in the community until 8 AM since "the other guy" was supposed to come at 7:30 AM to buy the speakers. At 8 AM, I showed up and the guy supposedly came by and wanted to buy them and was going to the bank but that was 1 hour ago. I guessed either he wasn't coming back or he never existed. She did not want to sell them for my asking price, so I thanked her for considering my offer, wished her well on her yard sale and drove back home. It was worth the risk even if I had driven three hours round-trip for nothing.

Later that night, I could not get it out of my head. Did she sell the speakers to "the other guy"?

The yard sale was over and my guess was she has no prospects to buy the speakers. I texted her back and said, "If they are still available, I would be willing to make one final trip and offered her another $100 from my original offer.”

To my surprise, she texted me the next afternoon saying that she would accept my offer!

After my wife called 911 and the paramedics got a pulse back, I quickly went by the ATM and began my third three-hour round-trip to pick up the remaining speakers. When I arrived, I chatted with the seller and her daughter. They were simply grateful that they finally had garage space once again. They wished me well with my new speakers and hoped I had a safe drive home.

Michael Stevens got his second pair of RF-7 II into the hands of fellow Klipsch forums member "Wakejunkie" whose setup you can see here.

I share my story as an encouragement to all that there still are some AMAZING deals to be had if you are patient and have some cash on hand set aside for those deals.

At no point did I try and manipulate or mislead her. I had a certain amount of cash available that I was willing to spend and made an offer. She had speakers that were of no value to her and was willing to exchange that for the cash I had to offer.

Sometimes they accept your offer, sometimes they don't. I definitely did not "need" any more Klipsch speakers but the price was right and I was glad to purchase them all from her.

Michael told us one of his “audio goals is to have owned every (or close to every) Reference and Heritage speaker Klipsch has made.” So, it’s safe to say that he is always on the prowl for Klipsch speakers. 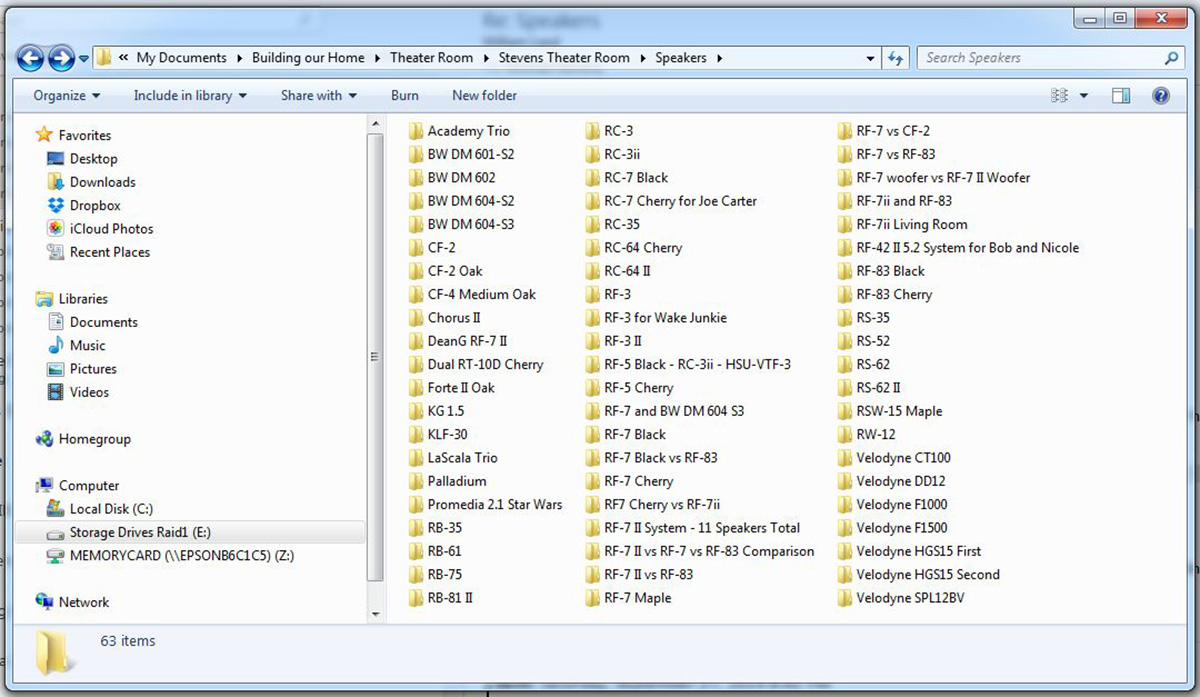 Michael Stevens took a screenshot on his computer of a list of all the photo albums he has for his collection of speakers.

Next on Michael’s list? The Cornwall, Klipschorn and ever-elusive Belle.

Maybe a few more people just need to get divorced. Not that we would ever wish that!