The Klipsch Stadium Before the Stadium 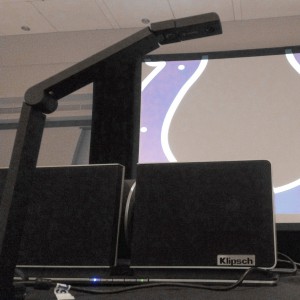 The Klipsch STADIUM is ready to fire up the Colts.

The sounds of a football stadium are unmistakable on gamedays. The booming PA, the barking vendors, the crunching tackles and cheers and groans from the thousands of spectators.

Take a step back and you realize that playing professional football is just as mental as it is physical. The endless strings of coaches on the sideline aren’t there as models for their fancy logo’d windbreakers.

The scheming, diagnosing and planning involved in each game is a monumental team effort that goes into effect as soon as the previous game of the effort.

When the Indianapolis Colts are on the road, the team has one final preparatory session the night before they take the field. Fifty-three players ranging from 190 to 350 pounds and their coaches gather in one of the hotel’s oversized meeting rooms

It’s there where the Colts video crew plays a montage motivational highlights for the team. The goal is to fire them up and lock them in to the task ahead of them.

To sufficiently fire up over 50 grown men in an extremely large room, the Colts needed a speaker that they can rock the house AND be portable enough to bring on the road.

The Colts first tried out the Klipsch KMC 3 portable speaker, but the team wanted something even louder. Just like what they expect out of the players on the field, they wanted the best. They needed the Klipsch STADIUM.

With over 400 watts of peak system power and state-of-the-art Tractrix® Horns, the Klipsch STADIUM delivers the power, detail and emotion the team needs.

“These speakers sounded amazing especially in the large meeting rooms at the hotel. The sound was rich, full and the bass pounded even in the back of the room. The players commented that the sound was AWESOME,” said Colts video director Erik Kunttu.

This final film session with the team is highly secretive. In fact, it is so secretive that photos are not allowed.

All of this preparation culminates on Sundays, where Klipsch brand ambassador Andrew Luck (and next season, Robert Mathis) put all their knowledge to the test.